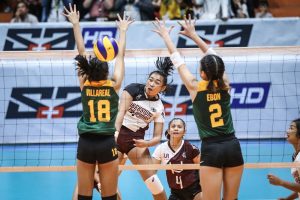 (FEB. 21)—The UP Women’s Volleyball Team picked its second win on Feb.20, demolishing the Far Eastern University (FEU) Lady Tamaraws in four sets, 25-18, 20-25, 25-22, 25-20, to stay unbeaten in the Season 81 of the University Athletic Association of the Philippines volleyball competition.

The Lady Maroons took the opening set behind the solid performances of Diana Carlos and Isabel Molde.  FEU came back strong in the second frame, establishing as much as a 10-point lead, 18-8, and subduing UP’s late rally to even match at one set apiece.

The third set saw the two teams battling to control the tempo of the game. The Lady Tamaraws had a slim lead, 16-15, at the second technical time out. Carlos, Molde and Justine Dorog, however, towed the Lady Maroons to take the third frame and gave UP a 2-1 match lead. 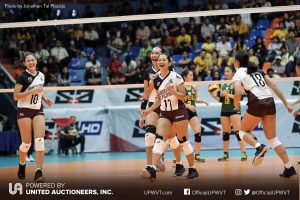 UP controlled the early goings of the fourth canto and erected an eight match-point lead, 24-16. FEU, however, fought back to trim the lead to four, 20-24, before Molde sealed the win for UP off a check ball from an FEU defender.

Carlos, the game’s best player, finished with 15 points while Dorog and Molde contributed 12 and 11 markers, respectively.

The Lady Maroons will play its third game against the University of Santo Tomas on Feb. 24, 2 p.m. also at the FilOil Flying V Centre in San Juan. — Bino Gamba