December 06, 2022
Thirteen distinguished UP Diliman (UPD) faculty were conferred the title Professor Emeritus by the UP Board of Regents at its 1376th meeting on Nov. 25. Five faculty came from the social sciences and law cluster (SS&L); the arts and letters cluster (A&L) and the science and technology cluster (S&T) each had three faculty members conferred the title; while the management and economics cluster (M&E) had two. The UPD College of Social Sciences and Philosophy (CSSP) had the most number of new professors emeriti with three, followed by the UPD College of Engineering (COE) with two. SS&L. The faculty members from the SS&L were Eduardo C. Tadem, PhD, of the UPD Asian Center; Ricardo T. Jose, PhD, Josefina N. Natividad, ScD, and Nimfa B. Ogena, PhD of the CSSP; and Sylvia E. Claudio, MD, PhD of the UPD College of Social Work and Community Development (CSWCD). Tadem. Photo from the AC website Tadem is a professor of Asian studies and convenor of the Program on Alternative Development, University of the Philippines Center for Integrative and Development Studies. He has been active in several progressive civil society and social movements. He has 150 publications in books, academic journals, and periodicals on various political economy and social issues. Jose. Photo by Jefferson Villacruz, DIO A prominent historian, Jose is one of the country’s foremost scholars on the Second World War in the Philippines and the Asia-Pacific. He specializes in military and diplomatic history, with a focus on the Japanese occupation of the Philippines. In 2019, the Metrobank Foundation conferred upon him a Metrobank Foundation Outstanding Filipino award. Natividad. Photo from the UPPI website A former director of the UP Population Institute (UPPI) and noted demographer, Natividad has published extensively on the topics of social science and health, sociology of ageing, adolescent reproductive health, HIV/AIDS research, distance education, and evaluation research. Among her recent projects was the 2013 Young Adult Fertility and Sexuality Study conducted along with Ogena, her colleague at the institute and fellow professor emeritus. Ogena. Photo from the UPPI website Ogena has been with UPPI since 2005 and served as its director from 2002 to 2005. She served as the chairperson of the Inter-agency Committee on Migration Statistics of the Philippine Statistics Authority. Her research interests include migration, mobility and occupations, gender and development, marriage, family and the life course, population ageing and transition to adulthood, fertility and reproductive health including HIV/AIDS, and urbanization.
Campus

December 05, 2022
In solidarity with the United Nation’s (UN) declaration of the year 2022 as the start of the International Decade of Indigenous Languages (Decade), the UP Diliman (UPD) Department of Linguistics (DLingg) held Paglulunsad at Paglalayag, a lecture presentation and website launch in celebration of DLingg’s centenary. Event poster. Photo by Jefferson Villacruz, UPDIO This was also the department’s first face-to-face event since the pandemic began in 2020. Jem R. Javier, PhD, Paglulunsad at Paglalayag project coordinator, in his welcome remarks, hoped the lectures and presentation will serve as a testament to DLingg’s commitment to promote and preserve the country’s indigenous languages by empowering the ethnolinguistic communities through teaching and extension works. “We hope that you see in today’s program the importance of linguistics and language studies as a social science determined not to just highlight language as a product of culture and human knowledge but also of the collective history, memory, and experience of the community that speaks it. As any fundamental right of a human being, linguistic right is essential and should be respected and honored by anyone at all times,” Javier said. Meanwhile, Rebecca Strating, PhD, an associate professor in politics and international relations at La Trobe University in Melbourne, Victoria, Australia, and director of La Trobe Asia, thanked the organizers for making La Trobe Asia part of the event. Paglulunsad at Paglalayag participants gamely join the event activity. Photo by Jefferson Villacruz, UPDIO She also gave the audience copies of the latest issue of The La Trobe Asia Brief featuring the policy brief Indigenous Language Rights and the Politics of Fear in Asia by Gerald Roche, Madoka Hammine, and Tuting Hernandez. Strating said the policy brief is essential in that it reminds the people of the importance of language rights as human rights. Roche presented the policy brief at Paglulunsad at Paglalayag and mentioned two recommendations to protect human rights and indigenous rights advocates and to help the International Decade of Indigenous Languages become successful. “We recommend that a special rapporteur for human rights defenders needs to immediately start producing the report on the indigenous rights and indigenous language rights,” Roche said. Roche was talking about the UN Special Rapporteur on Human Rights Defenders whose job, he said, was to protect human rights defenders around the world and produce reports about human rights defenders in relation to specific issues. Roche is an anthropologist and a senior research fellow at the Department of Politics, Media, and Philosophy at La Trobe University. “The second thing that we recommend is that the people who are in the organizational committee for the Decade needs to form a working group that provides recommendations to indigenous…
Research

UP Diliman (UPD) has entered into a memorandum of understanding (MOU) with the Quezon City (QC) government to help create business hubs in the city for the benefit of startup entrepreneurs. UPD Chancellor Fidel R. Nemenzo was among the academic leaders who signed the MOU to formally launch the StartUp QC Program on Oct. 28 […] 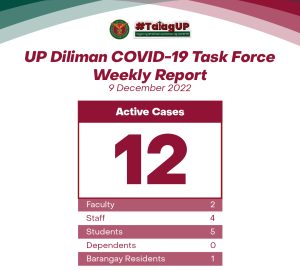 The UP Diliman (UPD) Archaeological Studies Program (ASP) is now officially the UPD School of Archaeology (SA). The program’s elevation to a school was approved by the UP Board of Regents at its 1375th meeting on Nov. 10. The elevation means that it is now an independent academic UPD unit which is no longer attached […]

The team of the UP Diliman Cesar E. A. Virata School of Business (VSB) bagged the championship of the 22nd Financial Executives Institute of the Philippines (FINEX) Inter-Collegiate Finance Competition (ICFC) on Nov. 25 at the Philippine Stock Exchange Tower in Bonifacio Global City, Taguig City. The VSB team is composed of business administration and […]

The university-industry connection and sustainable development

Moments and Memories: A Solo Exhibition by Yasmin Almonte

The solo exhibit “Moments and Memories” by Yasmin Almonte, a...
See more events