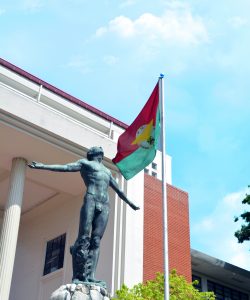 UPD occupies 493 hectares of prime land in Quezon City, featuring an array of both old and new buildings housing the various disciplines that offer comprehensive education covering all facets of human behavior and development at the baccalaureate and postbaccalaureate levels.

As of January 2020, UPD had 250 academic programs, 71 of which were in the undergraduate level, 100 in the master’s, professional master’s, Juris Doctor, BA-MA Honors, and 48 in the doctoral levels. Seven Associate in Arts and 24 graduate diploma programs are also offered, with extension programs in Pampanga and Olongapo City and currently under development, specialized programs at the UP Professional Schools at the Bonifacio Global City.

UPD is the biggest constituent university of the UP System in terms of degree-granting academic units, student population, faculty and library resources. In the second semester of Academic Year 2019-2020, UPD had 23,360 students, of which 13,558 were in the undergraduate level, 820 were in the Juris Doctor program and 8,276 in the master’s and doctoral levels. In addition, 706 were enrolled in the trimester master’s programs namely the Archaeology Studies, Business Administration, Finance Management and Tropical Marine Ecosystems Management.

The Arroyo government likewise allocated P3.5 billion to the ERDT in 2007.

The ERDT was created to deliver high impact researches aligned with the country’s National Science and Technology Plan and the Medium-Term Development Plan, to attain a critical mass of MS and PhD graduates, to upgrade the qualifications of practicing engineers and to develop a culture of Research and Development.

The ERDT is implemented by a consortium of eight member universities offering graduate programs in the various engineering fields in the country, with UPD as lead university.  As part of the program, funds were allocated for construction of buildings for the following: Chemical Engineering, Electrical and Electronics Engineering Institute, Institute of Civil Engineering; Mining, Metallurgical and Materials Engineering, Industrial Engineer/Mechanical Engineering, and Energy and Environmental Engineering.

UPD has extensive alliances with international institutions of higher learning for joint academic programs, research, and student exchange—providing the institution with opportunities for curricular enhancement, faculty development, resource generation, and sharing of expertise and programs.

UPD’s academic buildings and public art are set in a landscaped environment which is a result of the evolution of its campus plan in the face of changing architectural theories and styles, as well as its dynamic relationship with the concerns and events of the nation.

Thus, UPD fulfills its role as a model of undergraduate instruction, a center for graduate education and research, and as a major source leadership and expertise for public service.

History of the University of the Philippines