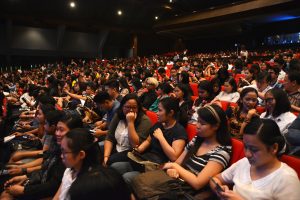 Student achievers during the awarding ceremony at the University Theater

(MAY 21)— UP Diliman (UPD) celebrated the achievements of outstanding students in the shortest program ever in the history of the Parangal sa Mag-aaral at the University Theater on May 8.

This year, UPD honored 3,748 University Scholars (US) in the undergraduate and graduate levels and students who distinguished themselves in various fields.

The five academic units with the most number of US are the College of Engineering (COE) with 674 awardees, College of Social Sciences and Philosophy (CSSP/515), Cesar E.A. Virata School of Business (VSB/434), College of Science (CS/285) and College of Mass Communication (CMC/244).

In the graduate level, COE again topped the list with 91 followed by CS (75), College of Education (70), Technology Management Center (64) and School of Urban and Regional Planning (47).

UPD also recognized graduates who made it to the top 10 in the licensure examinations for social workers, interior designers, teachers, guidance counselors, accountants, chemists, geologists, electronics engineers, electrical engineers and librarians; along with those who have distinguished themselves in other fields; and winners in national and international competitions. 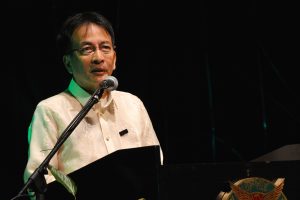 UP Namnama also received the 2018 Ignacio B. Jimenez Excellence Award for Student Organization Social Innovation Projects and a cash prize of P50,000 for their “SIRIB Quiz Show and Saririt Cultural Festival” project.

In addition to the certificate of recognition, the awardees also received a Parangal sa Mag-aaral pin designed by Kevin Brandon E. Saure, a CSSP graduate student and staff of the UP Diliman Information Office. Students who attended the awarding ceremony were given an additional USB card as a special token.

Enabling environment for the students. Chancellor Michael L. Tan in his welcome remarks said with the help of the Office of the Vice Chancellor for Student Affairs (OVCSA), the administration is working on further improving the certificates and special tokens given to the student achievers.

Tan also said “We want you to know we appreciate whatever achievements you have, academics wise as well as all forms of achievements. I also want you to remember the role of the faculty, administrators and staff in enabling you to be able to achieve.”

Meanwhile, the total number of US and awardees this year is slightly lower compared to last year based on the Parangal sa Mag-aaral’s souvenir program.

Tan explained that the number of outstanding students this year slightly decreased because of the stricter implementation and changes in the criteria to maintain the award’s high standards.

Although he said it is still a big number and he believes that it would continue to increase in the coming years “I think it’s also because we have tried to give you [the students] a more enabling environment, a place where you need not worry too much about small things and concentrate on your studies.”

In addition, he said “We hope that we will be able to establish this tradition of thinking ahead, even the students, in terms of what we may be able to use so that we might have more outstanding achievers. Baka sa susunod na taon, lalong mapupuno itong theater natin.”

Shorter program. The Parangal this year is shorter compared to last year’s program. Instead of calling the student achievers on stage individually, they were called per category and were asked to stand up from their seats and attach their respective pins.

In addition, instead of having one student representative to speak on behalf of all the student achievers, three students delivered their messages and led the pinning per batch.

Arbeen R. Acuña from the College of Arts and Letters led the pinning and spoke on behalf of the licensure examinations topnotchers and students who won in the national competitions. 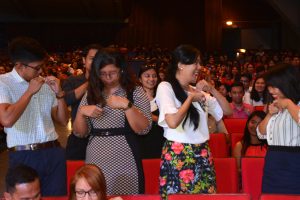 Pio Niño Opinaldo, College of Human Kinetics graduate student and faculty, led the pinning and spoke on behalf of the student athletes and student volunteers.

Lastly, Sheena Lorenzo of VSB led the pinning of the Parangal sa Mag-aaral pin and spoke on behalf of the US.

The program was emceed by Prof. Manuel C. Manuel III of VSB while the intermission numbers were provided by Mandrake Ferrer of Impossibros, the UP Madrigal Singers, Rod Marmol’s spoken word poetry performed by Charmaine Aranton of Dulaang UP with interpretive dance by Jommelle Era, and the Legato Visual Performing Arts.

The event ended with the singing of UP Naming Mahal led by the UP Madrigal Singers.