UPD honors cream of the crop 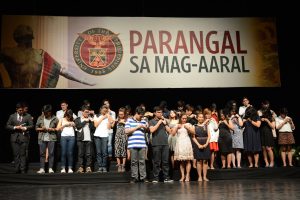 (MAY 4) — UP Diliman’s (UPD) best and the brightest University Scholars (US) in the undergraduate and graduate level and those who distinguished themselves in various fields were recognized at the Parangal sa Mag-aaral 2017 in a ceremony held at the University Theater on Apr. 27.

The five academic units with the most number of US are the College of Engineering (CoE) with 816 awardees, College of Social Sciences and Philosophy (CSSP/620), Cesar E.A. Virata School of Business (VSB/464), College of Science (CS/318) and College of Arts and Letters (CAL/301).

CoE and CSSP are units with the largest student population while CEd, the largest graduate enrollment.

UP also recognized graduates who made it to the top 10 in the  bar and licensure examinations for architects, librarians, teachers, accountants, interior designers, psychometricians, civil engineers, electronics and communication engineers, electrical engineers, chemists and geologists; those who have distinguished themselves in other fields; and those who won in national and international competitions. 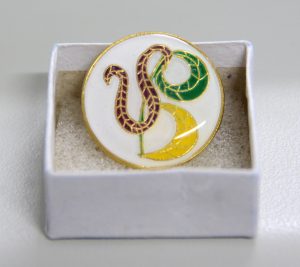 Student volunteer tutors from the Diliman Learning Resource Center, the 2016 University Student Council Election volunteers, Corps of Cadets and Corps of Sponsors were given special awards. 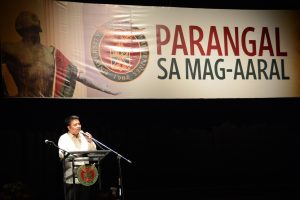 In addition to the usual certificate of recognition, the awardees also received a Parangal sa Mag-aaral pin designed by Kevin Brandon E. Saure, a CSSP graduate student and staff from the UP Diliman Information Office.

In his welcome remarks, Vice Chancellor for Student Affairs Jerwin F. Agpaoa urged the awardees to “give back and be blessings to others and help out those who may or may not be similarly situated. Helping out doesn’t have to necessarily involve great efforts and resources right away. You can start with baby steps. In your own small ways, you can be a tutor to fellow students or help us identify people who need help and refer them to offices concerned.”

Agpaoa also encouraged the student achievers to remain humble and to “Give back by acknowledging the sources of your strengths and achievements as well as the people who have had significant influence over your lives. Don’t own your achievement as if you were the only one responsible for it.” 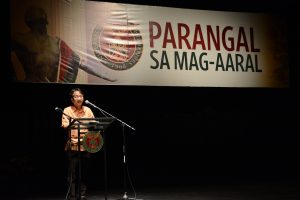 Meanwhile, Chancellor Michael L. Tan, who referred to the Parangal sa Mag-aaral as the highlight of the Linggo ng Parangal, reminded the student achievers “We will honor you today for academic excellence. But, I wanted to remind you that there’s more to UP than academic excellence. We also feel that part of the excellence of UP must be an ethos of service.”

The chancellor mentioned as an example students of the Music Education Department of the College of Music (CMu) who “have been working with communities in Angono, Payatas, helping young people there to gain access to music. This is so quiet but I was just so overwhelmed during the concert of the Music Education Department. The orchestras of Angono and Payatas were playing together with our UP students and the music ensemble is so much better.”

In addition, Tan said the victory of student achievers and athletes are important because “Ang tagumpay ng UP ay tagumpay ng bayan. Your excellence in every field you are is always a victory for the nation. So, I would like to remind you about that. The feelings of joy you will have today when you get your medals and other honorifics will pass. They are fleeting and will pass very quickly but when you engage yourselves in public service, you will find that years from now, as you see the fruits of your labor, you will be proud of it. You will continue to feel the pride pass the value of your medals.”

Like the DIWATA-I Microsatellite which celebrated its first anniversary of being launched into space on the same day as the Parangal sa Mag-aaral, the Chancellor said the student achievers “Just like DIWATA-I, you and the rest of UP will soar to greater heights and when you soar to those greater heights, together with the nation and not just with UP Diliman.”

He talked about the three important insights he gained while studying in UP which have molded his path and vocation: dare to dream, yearn to serve and live each day in gratitude. 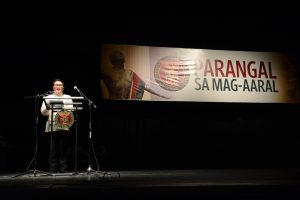 Angangco said “Daring to dream opens up possibilities that we never conceived of; daring to dream invites us to take risks; daring to dream allows us to make a choice. At the end of the day, is it not our dreams that fuel us to step out and change the world?”

In changing the world, he encouraged his fellow achievers to serve. He said “When we yearn to serve, we desire for humanity a better life and a better future. Yearning to serve is what inspires Honor and Excellence. Find exactly what it is in your vocation that stirs your desire to serve.”

The program was emceed by CSSP Professors Jairus D. Espiritu and Marielle Antoinette H. Zosa. UP Dancesport Society and UP Concert Chorus provided the intermission numbers.

The event ended with the singing of UP Naming Mahal with accompaniment from the UP ROTC Symphonic Band under the baton of College of Music professor Rodney Ambat.