A Latin phrase meaning “with the greatest honors,” the SCL is the university’s highest academic distinction for graduates who earn a weighted average grade (WAG) of 1.20 or better.

Williard Joshua D. Jose, BS in Electronics and Communications Engineering (BS ECE), with a WAG of 1.058, led the top honors.

Following Jose was another BS ECE major, Rangel DG. Daroya (1.074). The third highest was Patricia S. Sy, Bachelor of Arts (BA) in Sociology from the College of Social Sciences and Philosophy (CSSP), with a grade of 1.089.

AIT and CHK, respectively, have their first SCL among their graduates. 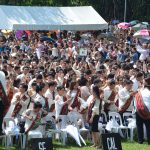 Total graduates.  As of Jun. 21, the candidates for graduation comprised 3,666 undergraduate degrees and 944 graduate degrees broken down as 58 in the doctoral, 739 masters and 147 diploma levels.

Chancellor Michael L. Tan, who welcomed the graduates, parents, guests and university officials, reminisced about his own graduation 40 years ago and made a meaningful comparison between the past and present commencement exercises.

UPD graduation in retrospect. Tan said his graduation in 1977 was held during the summer while today, “because of the shift in our academic calendar, we are holding it right at the start of the rainy season, which created many logistical challenges, including worrying about whether the rains would spoil our sunflowers, which we didn’t have in 1977.  Kahit halos araw-araw ang ulan, natuloy ang mga sunflowers, in full splendor; the sunflowers were as determined as you are to make today special.”

He said they used the toga in 1977, which he described as a portable steam bath in the summer. “Fortunately, we shifted to our national attire and the sablay, which is so much more elegant, and Filipino,” Tan said.

The Chancellor also talked about the significant difference between 1977 and 2017 which is the increase in the number of Latin honors.

“I do not believe this is inflationary and attribute it to the passing of terror professors, as well as getting students who are able to achieve much more, thanks to improvements in basic education and all the new technologies we have today,” he said.

In his last comparison of 1977 and 2017, said “In 1977, we were four and a half years into martial law.  Our commencement exercise today happens a month into martial law in Mindanao, overlapping with Islam’s sacred month of fasting and reflection.  Today’s commencement happens on the eve of Eid al-Fitr, the ending of Ramadan, a time for celebration and hope, and a time to renew our commitment to building peace for our nation.” (See full text of Chancellor’s opening remarks here.) UP conferred Diokno, a UPD Professor Emeritus from SE, a Doctor of Laws, honoris causa, at the commencement exercises.  The degree is the University’s highest academic rank and honor.  According to the Commission on Higher Education, a Doctor of Laws, honoris causa, is awarded to public servants and lawyers who have contributed to international understanding, leadership and the rule of law. (Refer to Sec. Diokno’s full speech here.)

Compassion and service.  Speaking on behalf of the graduating class was Ghodsinia, a BS MBB graduate from CS.

A few days before the graduation, Ghodsinia became a media sensation when it was known that he is a Maranao with roots from Marawi City.  His mother, Miriam Alonto Ali, hails from Marawi City while his father, Behrouz Ghodsinia, is an Iranian who adopted a Filipino citizenship.

Marawi City has been consistently making headlines since the Maute terrorists launched an attack on the city on May 23 prompting Philippine President Rodrigo R. Duterte to declare martial law in Mindanao.

In his speech, Ghodsinia emphasized the need for peace.

Ghodsinia also expressed his grief over the lack of opportunities for most Filipinos due to poverty. But despite of all these hardships, he said “Here I am, standing in front of you today, as proof that members of minorities like us Maranaos can also do well, and contribute effectively to societal growth—if given the same opportunities and rights like many other Filipinos. Here I am, speaking to you as proof, that anyone—regardless of religion or ethnic ties—can excel if equal opportunities are available to all.”

“We, members of the Filipino minority, are your brothers and sisters too—and on equal platform based on mutual respect—we can all work together towards a stronger, more united Philippines,” he added. (Refer to full speech here.)