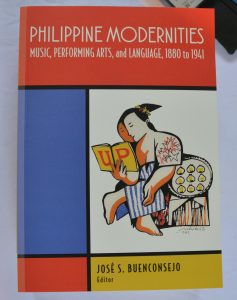 (MAY 29)—The UP College of Music (CMu) launched two books about Philippine music and culture on May 25 at the lobby of CMu’s new library, the Maceda Hall.

Tan said Philippine Modernities is about a particular cultural history of modernity in the Philippines from the 1880s to 1941. Essays by 18 contributing authors explore salient topics such as capitalist practices of market exchange; the articulation of a new sense of belonging to a new social order using arts and language; and the struggle of arts as social signs in politics of identity, among others. This book advances our understanding on how entanglements with the social practices of modernity led to significant local cultural transformations that were unique to the Filipino experience. The book has 523 pages and 18 chapters. Saysay Himig, on the other hand, is an anthology of 50 short essays that narrate the musical stories of the Filipinos from the time when the intellectual culture began to thrive and articulate the emerging sense of nationhood in the 1880s to the start of the Japanese occupation in 1941. The essays trace the development of transcultural Philippine music and musical practices, and they provide an alternative assessment of our nation’s history, focusing on the production and circulation of cultural nationalist discourses of the late nineteenth and early twentieth centuries. The book has 30 contributing authors and consist of 421 pages and 50 chapters. 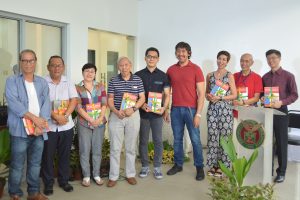 Buenconsejo said the Philippine Modernities was made possible through an EIDR grant from the OVPAA in 2013 during the 50th anniversary of CMu’s Abelardo Hall Auditorium.

The former dean said “We also applied for grants to upgrade our facilities and these are still for completion today. I sincerely thanked the higher administration for these endowments. Luckily, we now stand in front of the music resource center, music library, the José Maceda Hall, which is at the heart of our academic identity.” Tan, meanwhile, said the Saysay Himig coffee table book project was introduced to him by Buenconsejo in September 2015 after the grant requested by the College was approved by former VPAA Dr. Gisela P. Concepcion.

Tan also said “I thank the 30 distinguished and very cooperative authors who said yes to the project. Originally, it was supposed to be 100, but coming up with a list of items, list of topics, I negotiated with Sir Jojo and said, ‘Sir, puwede po bang 50 na lang?’ There were several authors which we also asked, but sadly, they were busy during that time. But, we are very lucky that we were able to complete the 50 authors.” In addition to the two books, three accompanying recordings entitled “Saysay Himig: An Anthology of Transcultural Filipino Music, 1880 to 1941” were also launched during the program. The recordings cover piano music (CD 1), vocal and instrumental music (CD 2), and ensemble music (CD 3).

Vice President for Academic Affairs (VPAA) Maria Cynthia Rose B. Bautista, in her message, said “These works stand out for their role in deepening our understanding of our Filipino cultural heritage. They are also an excellent example of a historiography that ‘highlights social experience and its embodiment in patterned artistic symbols.’”

Dela Peña said “Maceda embodies the kind of intellectuals we want to produce—a prodigious scholar and an accomplished musical artist, indeed, utak at puso, as we say in UP.” The Maceda Hall will house, on the first floor, the extended music library, graduate department, paper archives and laboratory.

The second floor will be the new home of the UP Center of Ethnomusicology “complete with its library, reading room, instrumentarium, digital and material archives, and media processing laboratories. More importantly, it will house the Jose Maceda collection, a treasure not just for the University but for the country, and here I say, for the entire humanity having been ascribed to the UNESCO Memory of the World Register,” Dela Peña said.

Complimentary copies of the books and CDs were handed over to the contributing authors during the program.

Among those present were National Artist for Music Ramon P. Santos, UP System Executive Vice President Teodoro J. Herbosa as well as some CMu faculty, staff and students.

The program ended with a closing remarks from Dr. Jose Neil Garcia, UP Press director. Prof. Patricia B. Silvestre emceed the event while Prof. Lester Demetillo provided the intermission number and performed the guitar rendition of “Tango Filipino” by Fernando Canon.

Philippine Modernities and Saysay Himig books are now available at the UP Press Bookstore at P1,200 and P850, respectively.

According to the UP Press Marketing Department, the UP Press consign with the Popular Bookstore, and by request, at the National Bookstore. For orders, they may contact Ms. Lei Taguba at 9284391 loc. 111.