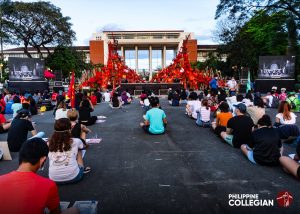 Held infront of “Barikada,” the massive art installation at the Oblation Plaza which served as stage and backdrop, the concert featured performances from artist-activists alternating with messages from key DN supporters.

The concert was also livestreamed over the official Facebook pages of UP Diliman, the All-UP Academic Employees Union and the OSR, with donation accounts and channels displayed on screen every few minutes.

Some of the youth organizations represented during the concert were Alliance of Concerned Teachers Partylist, Rise for Education, the National Union of Students of the Philippines, Save our Schools Network, Narra Youth Organization, Sinagbayan UP, Save San Roque Alliance and Congress of Teachers/Educators for Nationalism and Democracy.

Initiated by the OSR on Feb. 3, DN is “a platform that can unite the whole UP community – students, teachers, staff, alumni, community members – in the call to actively defend the University.”

The OSR said DN “serves as an umbrella for all efforts and initiatives regardless of origin or color in the fight to uphold and defend academic freedom and human rights for the University and the nation as a whole.”