5 policy changes at Retirado for more beneficiaries and service awardees 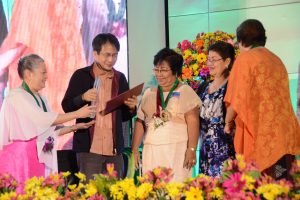 (MAY 5)—Policy changes to benefit UP Diliman (UPD) retirees and service awardees were implemented in this year’s Parangal sa Retirado at Gawad Paglilingkod held Apr. 26 at the GT Toyota Auditorium.

Speaking before guests and honorees at the Parangal, Administration vice chancellor Virginia C. Yap said the five policy changes resulted in an increase in the number of more retired personnel honored this year. 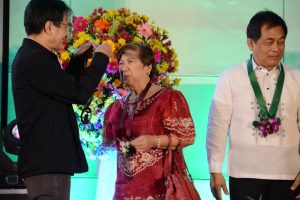 The second policy change is the lowering of the number of years of service to 10, from the previous requirement of at least 15 years.  These personnel have retired due to total or permanent disability, serious illness or due to death.  Yap explained the shortening of years of service from 15 to 10 is based on the administration guidelines that recognizes loyalty beginning at 10 years of service.

The third change in policy is the inclusion of personnel under compulsory retirement regardless of their number of years of service. 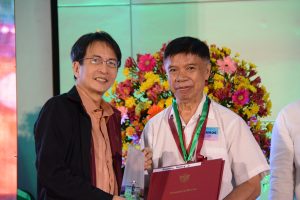 Physics Professor Henry J. Ramos was among noted members of the UPD faculty who were honored this year as they retire from service.

The fourth change is the inclusion of extended faculty among the Retirado honorees.  They will be honored based on their last day of service and not for their compulsory retirement, Yap said, because extended faculty personnel are considered still in active service.

The fifth policy change concerns the Gawad Paglilingkod, which is given to UPD personnel in active service who have rendered at least 40 years of service to the university.

Previously, Gawad Paglilingkod required a recipient to have at least 40 years of continued active service to UPD without incurring a single leave of absence without pay (LAWP).  This year, this provision has been amended by two conditions.

First, a personnel with at least 40 years of service and LAWP is qualified for the award provided that the LAWP was incurred prior to the reckoning of the 40 years of continued service. 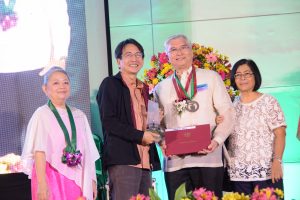 Noted Oceanographer and UPD faculty Gil S. Jacinto (second from right) of The Marine Science Institute receives his service award for 41 years of service from Chancellor Michael L. Tan (second from left) and Director Escoto (left). Dr. Jacinto is accompanied by his wife, Dr. Sonia D. Jacinto of the Institute of Biology.

“Pinahihintulutan pa rin ang five days leave of absence without pay incurred within the 40 years of service.  Provided, that by December 31 of the year immediately preceding the award, ang personnel ay merong 40 years and five days of service,” Yap said.

The vice chancellor said the changes in conditions for the Gawad Paglilingkod is in recognition of the length of active service of the personnel to the university.  “Hindi dapat mabalewala (ang paninilbihan) dahil lamang sa isang araw na leave of absence without pay o kahit na limang araw na leave without pay.  Forty years is still 40 years,” Yap stressed. 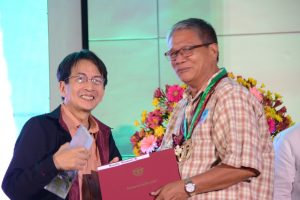 Romeo R. Rualo of the Office of the Chancellor receives his service award honors from his boss Dr. Michael L. Tan.

This year, 100 retirees were honored at the Parangal sa Retirado, with the College of Science having the most number of retirees at seven, followed by the College of Arts and Letters and the National Institute for Mathematics Education Development at six each.  The retirees were given a medallion, a plaque and a certificate of appreciation.  Of the retirees, 38 were given special awards for more than 40 years of service and a P60,000 cash prize, 10 were honored posthumously, two of the 10 were among those who received special awards.  The Parangal sa Retirado, a part of the Linggo ng Parangal celebrations, is the university’s recognition of the retirees’ invaluable contribution in the university’s service to the public.

Meanwhile, 25 personnel received the Gawad Paglilingkod, in recognition of their at least 40 years of active service to the university, five of whom benefited from the amendments to the Gawad Paglilingkod policy.  The recipients each received a medallion, a certificate of appreciation and P40,000 cash prize.