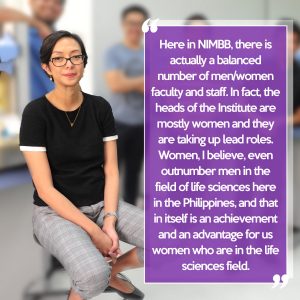 (March 12) — In celebration of International Women’s Month, the UPD College of Science honors the role of women in the advancement of scientific research and their contributions to society. For the entire month, stories of their very own women scientists, faculty and staff from the different institutes will be featured and they will be providing insights into what it’s like to be a woman in science.

First on the list is Prof. Pia Bagamasbad, PhD of the National Institute of Molecular Biology and Biotechnolog (NIMBB), she is an associate professor and the Principal Investigator of the Molecular Endocrinology Laboratory (MEL).

Bagamasbad is devoted to studying the role of hormones in the development of the nervous system and hormone-dependent cancers.

Working as a Research Assistant in Boston, Massachusetts, Bagamasbad witnessed first-hand the existing gender inequality in the life sciences field, which is prevalent in the United States and other western countries. When she returned back to the Philippines, she saw that there is an almost equal number of male and female scientists and realized that it is more advantageous as a woman to pursue a career in life sciences in the Philippines compared to the United States.

“In the field of life sciences, I would say that here in the Philippines, there is not much of a difference between the number of men and women scientists, especially in the academe—It is an achievement! However, when we talk about tenure track positions, it is still dominated by men,” Bagmasbad said.

Bagamasbad believes that women should take up more space, especially in scientific fields, because women need more representation, and stereotypes about women only staying at home to take care of the family should no longer exist.

“Some people tend to have gender bias towards women because they are taking up multiple roles apart from their career. Women, for me, are excellent multitaskers which makes them efficient with the tasks they are handed.” 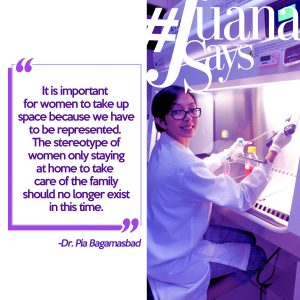 Despite women thriving in the academe and scientific fields, Bagamasbad said there is still a need for more women to take up more leadership roles, especially now where countries with great COVID-19 response are led by women. Bagamasbad added that there is also a need for more students to pursue sciences.

“In the life sciences field, the struggle right now is not necessarily gender inequality, but to get more students, male or female, to pursue careers in sciences and for scientists/professionals to stay in the country. Right now, in this pandemic, that is what we need and what should be prioritized.”

An editorial board member of the Journal of the ASEAN Federation of Endocrine Societies, Bagamasbad’s research interests include hormone action and neuronal development, hormone-related/hormone-driven cancers, and long-term and epigenetic effects of stress on the brain.

A Balik PhD grantee, Bagamasbad was part of the project implemented by the UP NIMBB and the Philippine Genome Center in 2020 that provided training for the medical technicians on the qRT-PCR assay that is used for detecting the SARS-CoV-2 virus. The lecture covers the science of virus detection and the rules on sample management and data interpretation.

The trained lab technicians were deployed all over the Philippines and help increased the country’s testing capacity.

Bagamasbad earned her PhD in Molecular, Cellular and Developmental Biology from the University of Michigan, Ann Arbor, USA in 2012. For her valuable researches in the molecular mechanisms of hormone action including those related to cancer, Bagamasbad received the 2019 National Academy of Science and Technology-Outstanding Young Scientist Award (Molecular Endocrinology).

Bino Gamba with reports from UPD College of Science