When micro does macro: the UL Microform Section 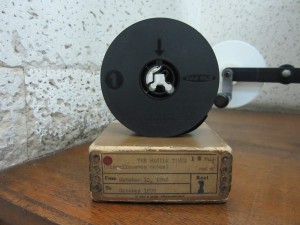 (November-December)—When you thought every information you need is in the web, think again.

The Microforms Section of the University of the Philippines (UP) Main Library contains information “you will not find online,” Grace Tabiendo, Media Services Head, said.

With a collection of 12,975 reels of microfilms (MCF) and 600 plates of microfiches in a wide array of subjects, the section provides information to an average of 10,000 users per year. Located in the basement of the library, the section houses Philippine government documents, Filipiniana rare books, theses, dissertations, newspapers, periodicals and vernacular materials, as well as foreign publications.

Microfilms and microfiche are films containing photographic records of printed materials on a reduced scale. Their main difference is storage – microfilms are film strips rolled in reels and placed in boxes while microfiche are flat sheet films or plates, mostly about the size of a 5 x 6 inch index card, and placed in envelopes.

The first edition of the MCF was invented in 1839 but its commercial production began only in the 1850s. The microfiche and the first microfiche reader however, were only invented in the 1960s.

Government and historical documents. The section has the earliest issues of the Philippines’ oldest daily and weekly newspapers, Manila Times (MT) and Philippines Free Press (PFP), respectively. “We have the Oct. 12, 1898 MT issue and the Jan 20, 1907 PFP issue,” Tabiendo said. Although the collection of the two newspapers has minimal gaps in the early 1900s and World War II years, the volume of information is still a priceless tool for research and education.

Users interested in the Philippine Revolution can use the MCF rolls containing insurgent records from 1896 to 1901 with associated records of the United States War Department from 1900 to 1906. “These microfilms contain documents related to Jose Rizal, Emilio Aguinaldo, Andres Bonifacio and Artemio Ricarte, among other heroes associated with the Revolution,” Tabiendo said.

Martial Law researchers, on the other hand, will find radical papers stored in 25 MCF rolls. “The radical papers, related to the struggles of people opposing Marcos and Martial Law, are dated between the late 1960s and early 1970s,” Tabiendo said. These are documents, brochures, pamphlets, newsletters, periodicals, manifestos and other printed materials of anti-Marcos movements during the Marcos administration. 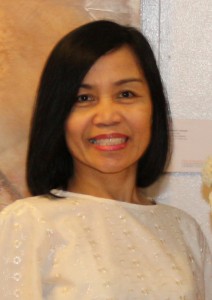 “The Gazette is important for researchers on Philippine history and politics,” Tabiendo said.

National dailies. The section also carries a collection of six major national broadsheets. “We are the only university with copies of these newspapers with nationwide circulation,” she said. Aside from the Manila Times, the other broadsheets are Malaya, Manila Bulletin, Manila Standard Today, Philippine Daily Inquirer and Philippine Star. “The MCF collection of the six broadsheets started from the first issues of the newspapers (MT and Bulletin in the 1900s with the other four in the 1980s) up to the 2012 issues. The 2013 up to the current issues are available in print,” Tabiendo said.

The MCF copy of the newspapers contains all the sections of the print version, not only the news portion. “We put into MCF even the obituary because there were several occasions when users wanted to know how obituaries of important persons were written,” Tabiendo said.

Early years and challenges. The Microforms Section began in the early 1970s as part of the Filipiniana Section of the Main Library during the term of University Librarian Marina G. Dayrit.

The initial batch of microforms was purchased from the United States. Later, other government and academic institutions donated microforms to the library. “Alumni and alumni organizations also donated funds to purchase materials here and abroad while other alumni donated their microforms or personal collection of printed materials,” Tabiendo said.

The library was reorganized in the 1990s and the section was placed under Media Services which was established in Nov. 4, 1991 as part of the User Education and Services Division of the Main Library.

The library had many valuable Filipiniana books and periodicals which had become brittle due to old age and constant use. “To avoid further deterioration, these brittle materials were converted to microforms which could last for about 100 to 200 years,” Tabiendo explained.

Processes and maintenance. The section produces its own MCF reels using its MCF laboratory by converting the printed materials to MCF.

Each page is photographed using an MCF camera. The images are stored in an MCF roll which is 100 feet long. Each roll can store up to 1,000 images or 1,000 book pages which can make up several printed materials, like four 250-page books in one roll. 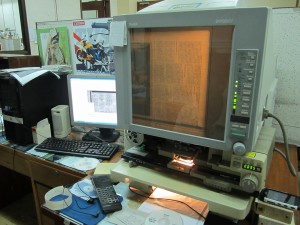 The microfilm scanner is used to scan the positive images of a microfilm to convert it to PDF which can be saved in another device (e.g. CD or flash disk) or to directly produce a print-out
version of a microfilm

The roll is placed in a processor and the negatives developed are cut per book or printed material. The negatives are then checked to verify if all the images are of good quality, with no missing portions and are not blurred. Poor quality images are re-shot.

An MCF duplicator is next used to produce a positive or service copy from the developed negatives. The service copies are the reels used by library users to view the documents using the MCF reader.

Another concern is the storage of the negatives and positives. “The temperature and humidity of the rooms should be maintained to avoid the warping and melting of the films which could result to jammed or useless rolls,” Tabiendo said.

“During past brownouts, some rolls, one of which is the El Renacimiento, were rendered useless because the films stuck to each other when they melted due to the heat. It is important that we have an alternative source of electricity so that when brownouts occur, the air conditioning system and MCF machines will continue working,” she added. The El Renacimiento is a newspaper during the early years of the American occupation.

Reels unused for a year are cranked so that the film will not stick to each other.

Continuing service. Regular users of the section are mostly historians and history teachers doing research. “Professors abroad would ask assistance from UP professors to do research for them,” Tabiendo said. “Foreign professors teaching Philippine Studies or Philippine History also request copies of an MCF, either in MCF format also or digitized copy in portable digital format (PDF) burned into a CD,” she added.

Recently, Martial Law victims or the families of deceased victims processing papers for compensation claims went to the section for its newspaper collection. “Families using newspaper clippings as part of their application can only submit printed copies of the news sourced from the section. This is to avoid scammers from taking advantage of the claimants and also because only UP has a collection of the broadsheets,” Tabiendo said.

All services rendered to the claimants—from the use of the machines up to the printing of the news clippings—were free of charge.

Many land disputes were also settled using the land registration titles stored in the section because these titles contain the technical description of the lots.

“With the information we have in the Microforms Section, we are not only serving the university, but also the community and the country,” Tabiendo said.

“With the library’s modernization, the section will be expanded to digitize the microforms collection to increase their usability and accessibility. The existing microform collection will still be maintained for purposes of preservation,” University Librarian Chito N. Angeles said.

With its functions, large collection of valuable information and service to the University, community and country, the Microforms section is surely helping UP fulfill its mandate as a national, research and public service university.