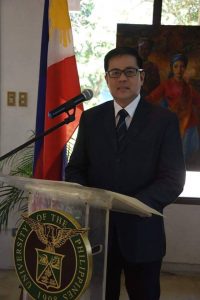 Prof. Jose Wendell P. Capili, PhD was recently named recipient of the NRCP Achievement Awards 2020 in the field of Humanities by the Department of Science and Technology – National Research Council of the Philippines (DOST-NRCP).

He has published seven books and over 300 articles in Asia, Europe, North America and Australia.

His first book “A Madness of Birds” (poetry, UP Press, 1998) was highly regarded in the world of literature and academe.  Filipino critic Tito Quiling Jr. said, “Splattered across its pages are colors such as cerulean or auburns, and images of falling leaves… from seeing migratory birds returning to their proverbial places to moments illustrating one’s love for his hometown are some of the pieces found in this collection of poems.”

His latest book “Migrations and Mediations: The Emergence of Southeast Asian Diaspora Writers in Australia (1972-2007) was launched by the UP Press on May 26, 2017 and garnered the 36th Philippine National Book Award for Literary History/Literary Criticism from the Manila Critics Circle (MCC) and the National Book Development Board (NBDB). For National Artist for Literature Bienvenido Lumbera, the book is “… remarkable for its steady grasp of a unifying vision encompassing literary production by writers coming from disparate cultures and historical backgrounds, and establishing their significance as a factor in the construction of the contemporary cultural identity of Australia.”

A Professor 12 at the UP Diliman (UPD) College of Arts and Letters (CAL),he has a PhD in Literature, Screen and Theatre Studies from The Australian National University (2007); MPhil Social Anthropology (University of Cambridge, 1996); Diploma in Japanese Language, Culture and Affairs (University of Tokyo, 1995); MA Comparative Literature (UPD, 1993); and AB Journalism (University of Santo Tomas, 1988).