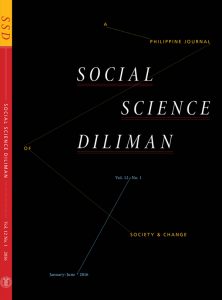 In her notes, Planta says SSD has brought together “works on education, language and history.”  She explains that even if the issue appears to be broadly themed, the works are actually held together by the “commitment to pursue new paradigms and new ways of looking at both old and new issues while challenging or refining the current mode of analysis, so that SSD becomes ‘a place’ not only to make research available but also ‘a place; to reflect upon research.”

“The roots of these realities,” Planta said, “are traced back to the feudal political economy in the 19th century, particularly with the opening of the Philippines to world commerce at the end of the Manila Galleon.”

The issue also has reflective essays from Gemino H. Abad and Ricardo T. Jose that pay tribute to the Faculty Center and reviews for the books “Representing Children in Chinese and U.S. Children’s Literature,” edited by Claudia Nelson and Rebecca Morris and “Hidden Lives, Concealed Narratives: A History of Leprosy in the Philippines” edited by Maria Serena I. Diokno.

Planta describes the journal’s cover design as breaking free “from the unified template of the Diliman journals.” Designed by Karl Castro, the new SSD look aims to be distinct with a balance of boldness and sustainability “to reflect the dynamism of SSD—a journal rooted in the present but well aware of and engaged with the larger historical past,” Planta writes.  The new look comes in black, the color of gravitas.