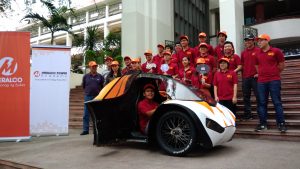 “Siglo,” the electric vehicle created by Team Dagisik University of the Philippines, won 1st Prize in the Shell Eco-marathon Philippines 2017, held Feb. 4 and 5 at the Clark International Speedway in Pampanga.

Dagisik participated under the Urban Concept Battery Electric category, which requires the use of a single onboard battery for propulsion and other vehicle needs. Siglo posted the highest mileage (110.03 km/kWh) in its category, beating several other teams from Asia.

The Shell Eco-marathon competition challenges student teams around the world to design, build and drive the most energy-efficient cars.

According to team manager Rangel Daroya, Siglo has a body made of carbon fiber supported by front double wishbone suspension which produced a lightweight (Siglo weighs 90 kg) yet strong foundation. It is powered by a single lithium-ion battery connected to a single-hub motor and has electronic control units that process data and sends commands for the car peripherals and motor.

Dagisik is composed of undergraduate and graduate students from the College of Engineering’s Electrical and Electronics Engineering Institute (EEEI) led by King Marc Dimapilis on electronics and Johann Kenneth Alcantara on mechanics, with Prof. Gaudan Chekov Castillo as the faculty adviser. Siglo is co-funded by Meralco.

Dagisik is a Tagalog term for electron, a subatomic particle essential in electricity. Siglo is the Filipino word for century. The car was named in honor of the EEEI’s centennial year, 2016.

The team will move on to compete in the Shell Eco-marathon Asia in Singapore from March 16 to 19 with the goal to qualify in the World Driver’s Championship in London on May 28.