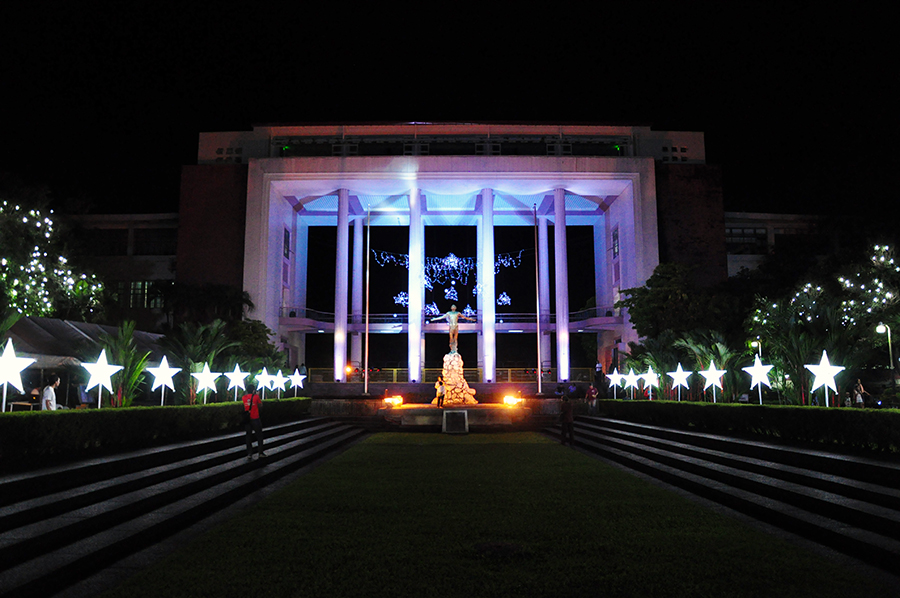 The Oblation Plaza is lit brightly for Christmas.

By Anna Regidor, images by Leonardo A. Reyes

(DEC. 4)—The street lights were dim as Quezon Hall and its surrounding areas were shrouded in darkness in the early evening of Dec. 1. Yet, the crowd that gathered at the Oblation Plaza was anything but apprehensive as the annual Pag-illaw—the ceremony where Christmas lights on campus are switched on for the first time—began.

UP President Alfredo E. Pascual and UPD Chancellor Michael L. Tan welcomed the audience, as Tan emphasized the importance of having activities like public concerts to bring the UPD community together.

Then the countdown began, led by hosts Dr. Jovy M. Peregrino of the College of Arts and Letters and UPD alumna Frances Makil Ignacio. By the count of 1, Pascual and Tan simultaneously turned on the Christmas lights at Quezon Hall and the crowd exploded in cheer.

The constellation-inspired décor at the Quezon Hall lobby, prepared by the Office for Initiatives in Culture and the Arts (OICA), along with the trees lining the driveway to the administration building came alive with brightly lit “starts” and hundreds of tiny colored and white lights.

The UP Dawani Women’s Choir sang a rendition of “Kumukutikutitap” by Ryan Cayabyab and “Christmas March” by the UP ROTC Symphonic Band under the baton of Edwin Lumanug followed the ceremony.

Community singing, where the crowd and officials sang a medley of Christmas carols, such as “O Come All Ye Faithful,” “Joy to the World” and “Ang Pasko ay Sumapit,” concluded the event.

Flag ceremonies. Along with the Pag-iilaw, Tan hopes to revitalize the flag-raising and flag-retreat ceremonies, which are held every first Monday and first Friday of the month.

“Magkakaroon tayo dito na may classical, may pop, may music, may quintets, may banda. Ngayong gabi nga may streetdance pa so we will span the whole range of cultural activities. Napakagaling naman ng mga grupo natin dito,” he said.

In the late afternoon of Nov. 28 and early morning of Dec. 1 special flag-retreat and raising ceremonies were held at the Oblation Plaza. Both ceremonies gathered UPD faculty, staff and students.

On Nov. 28, the performers included Professors Chona Noble (violin), Ed Pasamba (cello) and Gemma Malicdem (keyboards) from the UP College of Music (CM) with their renditions of “Pasko na, Sinta Ko” by Francis Dandan and “A Christmas Festival” by Leroy Anderson.

The CHK’s UP Danceport Society incorporated audience participation in their “Merry Latin Christmas” number, gathering both student and faculty volunteers to gamely join them onstage.

Not to be outdone, Keisha Joy Paulo of the CM’s UP Concert Chorus delighted the audience with a performance of “Tadhana” by UP Dharma Down. Her pop rendition of the classic Christmas carol “O Holy Night” earned a rousing round of applause.

Tan said the flag ceremonies are occasions to build community spirit and togetherness “…so that all students, all faculty, all staff and our communities can get to appreciate this. And these will be part of your memories 50, 70 years from now, and it’s something you will look for.”

The Office of the Chancellor through the UP Diliman Information Office and with the help of the Office for Initiatives in Culture and the Arts arranged for special performances and public concerts during these ceremonies featuring UPD’s cultural performers.