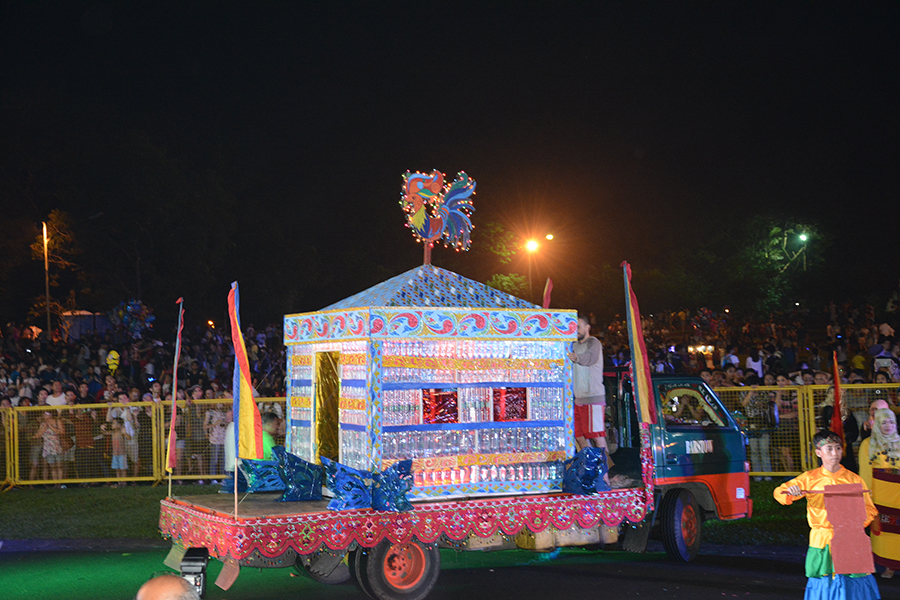 (DEC. 23)— Rain may have drenched the campus grounds on the afternoon of Dec. 15 but this did not dampen the festive atmosphere of this year’s most anticipated Christmas tradition in UP Diliman—the 2014 Lantern Parade.

With a theme “Pasundayag Diliman: Pag-uugat at Pagyabong,” the Lantern Parade showcased colorful and gigantic lanterns which depicted ‘Tatak UP’ motifs such as the UP Fair and the Oblation, as well as Filipino icons and traditions like the Sarimanok, palo sebo, national hero Andres Bonifacio and Filipino folk song-inspired floats made from recycled materials. There were new creations this year, most notable of which were rice crops and prayer room for Muslims.

At 5 p.m., throngs of people converged at the Oblation Plaza as well as the University Avenue to watch the parade.

Forty-five groups participated this year, comprising the degree-granting units, administration and support offices, student and religious organizations, and cultural/performing groups. The biggest contingents were from the College of Science, College of Human Kinetics (CHK) and the College of Fine Arts (CFA).

The parade would not have been complete without song and dance numbers. At least four contingents danced to “Happy” by Pharrell Williams. The Institute of Islamic Studies performed Singkil, a Maranao dance. The UP Arco and the UP ROTC Symphonic Band amused the audience with their rendition of popular Christmas songs while the CHK performed various Philippine dances, while the UP Wushu Club brought in their signature dragon dance and wushu exhibitions while the UP Pep Squad again thrilled the audience with their energetic stunts.

Meanwhile, legendary Filipino singer and songwriter Joey Ayala joined the Vargas Museum contingent, performing with his band the iconic piece “Karaniwang Tao” to the delight of the audience. Several artists also joined the contingent, painting a giant portrait of Andres Bonifacio during the parade.

Some participants were dressed as human lanterns while others had sea creature head gears or were in costumes portraying wood fairies, mother earth and angels. The College of Engineering reenacted “Cadena de Amor,” a former UP tradition, but with a twist—by portraying dancing demure ladies who became engineers.

The event became even more exciting because for the first time, the different CFA classes competed against each other. The Most Beautiful Lantern was awarded to the “Kalesa” lantern.

The parade was even more interesting with the dance number of the heads of the Office of the Vice Chancellor for Academic Affairs (OVCAA) and its attached units whose staff in bright, neon costumes, executed a well-rehearsed and synchronized 10-minute presentation.

Winners for the Best Lantern award were judged based on the following criteria: adherence to the theme (20%), creative use of materials (30 %) and presentation and visual effects (50%) for a total of 100 percent. The judges were Vice Mayor Josefina “Joy” Belmonte-Alimurung, Office of Student Activities coordinator Dr. Ma. Althea T. Enriquez and CFA Associate Professor Leo Antonio C. Abaya.

Also seen at the parade were the UP System and Diliman officials in their Christmas uniform shirts; and contingents from the UPD Extension Program in Pampanga, Barangay UP Campus, UP Babaylan, STAND-UP, All UP Workers Union and the Philippine Airlines Employees’ Association who joined the UP School of Labor and Industrial Relations’ contingent.

UP students and celebrities Rich Asuncion (AIT) and Martin Del Rosario (CMC), together with CAL student Carlo A. Cannu served as emcees.

A spectacular fireworks display sponsored by the Beta Epsilon Fraternity culminated the event.