By Albino C. Gamba Jr., image by Leonardo A. Reyes 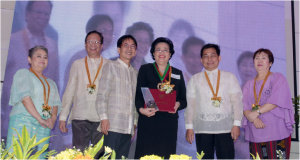 UP Diliman (UPD) honored 114 retirees for their loyalty and dedicated service to the University at the 2015 Parangal sa mga Retirado at 2014 Gawad Paglilingkod.

Of the total number of retirees, 41 were faculty members, 11 Research, Extension and Professional Staff (REPS), and 62 were administrative staff. Eighty-two were present at the program held at the GT-Toyota Auditorium, Asian Center on May 7. The retirees received a certificate of appreciation, a medallion and a glass token etched with the image of the Oblation. 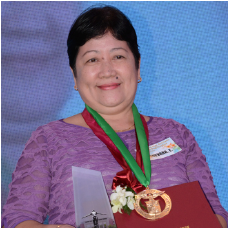 Among the retirees, the employee with the longest service record was Efren C. Valparaiso, Administrative Officer III at the Supply Property and Management Office, who had been with the University for 46 years, five months and 27 days.

Of the total number of honorees, 13 were recognized posthumously. Among them were Prof. Nita A. Quinto of the College of Music and Prof. Evangeline A. Zalamea of the College of Education. In the same program, 11 UPD employees, all administrative staff, received the Gawad Paglilingkod. The award is given to employees in active service who have served the University for 40 or more years and have not incurred a single leave of absence without pay. Organized by the Office of the Vice Chancellor for Administration and hosted by CAL professor Dr. Ma. Crisanta N. Flores, the program featured musical and dance numbers by the UP Singing Ambassadors and the UP Dance Company, respectively. The retirees and service awardees were later treated to merienda cena at the GT-Toyota grounds. The reception was elegantly set up, a much-deserved fete to the devoted and unselfish service of UPD personnel.