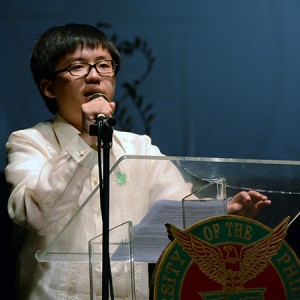 (JUNE 5)— UP Diliman recognized 4,378 University Scholars in the undergraduate and graduate levels and those who have distinguished themselves in various fields at the Parangal sa Mag-aaral 2015, May 6 at the University Theater.

The five academic units with the most number of US are: the College of Engineering (CoE) with 920 awardees, College of Social Sciences and Philosophy (CSSP/643), College of Science (CS/444), Cesar E.A. Virata School of Business (VSB/422) and College of Mass Communication (CMC/280).

In the graduate level, CoE again topped the list with 70 followed by the College of Education (CEd) with 60, CS (41), Technology Management Center (35) and School of Urban and Regional Planning (28).

CoE, CSSP and CS are units with the largest student population in the undergraduate level while the CEd has the largest graduate enrollment.

UP also recognized graduates who made it to the top 10 in the 2014 bar and other licensure examinations for architects, librarians, social workers, teachers, accountants, nutritionist-dietitians, interior designers, civil engineers, electronics and communication engineers, electrical engineers, geodetic engineers, chemists and geologists; those who have distinguished themselves in other fields; and those who won in national and international competitions. In addition, student volunteers at the Diliman Learning Resource Center, the 2014 University Student Council Election, Corps of Sponsors and UP ROTC Rayadillo were given special awards.

In his welcome remarks, Vice Chancellor Neil Martial R. Santillan urged the Iskolar ng Bayan “…ipagdiwang ang lahat ng tagumpay sa bawat larangan ng buhay sa pamantasan. Hindi magiging ganap ang ideya ng tagumpay kung walang pinagdaanang pagsubok at kung walang pagpapahalaga sa mga prosesong pinagdaanan nito. At hindi rin magiging ganap ang pagtamo ng tagumpay kung hindi ito kolektibong piangtagumpayan.” (“…celebrate all triumphs in every game of life in the university. The idea of victory will never be complete without experiencing struggles and if there is no appreciation in the process that it went through. Being victorious cannot also be completely achieved if it was not collectively triumphed over.”) 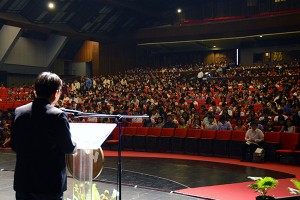 Chancellor Michael L. Tan, meanwhile, discussed some of the UP administration’s efforts in providing students with spaces conducive to learning and improving the living conditions particularly in the dormitories.

Janssen Kotah of the CSSP, in an inspirational message, talked about passion and possibilities.

Kotah said, “Passion is one word that moves most of us in achieving what our heart longs for. For me, it is the push that sustains me to go on no matter what the circumstances may be, something that ignites the desire deep within.”

He asked his fellow awardees, “…have you found your own passion? Have you found that one thing that you will pursue for the rest of your life, with honor and excellence? Have you found what it is to you will be using as the instrument to serve the people of this country, whose contributions to our education we should definitely repay with interest?”

He reminded them that possibilities give hope, and that “in whatever it is we do, or however it is we fulfill this dream, we take the dreams of the Filipino people with us. We have to realize that for the people of this country, we are the possibilities, the hopes, for the future of the country. To find a way to return this utang na loob is something we owe UP and our country.”

The program was emceed by Prof. Ma. Vanessa Lusung-Oyson of CEd and Prof. Jerwin F. Agpaoa of CSSP. CS Chorale and Marynor Madamesila of the College of Arts and Letters provided the intermission numbers.

The event ended with the singing of UP Naming Mahal with accompaniment from the UP ROTC Symphonic Band under the baton of College of Music professor Rodney Ambat.