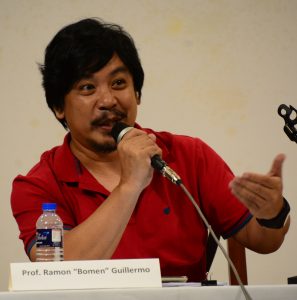 (NOV. 15) — On Feb. 12, hours before members of the UP Diliman (UPD) faculty began casting their votes for their choice of the next faculty regent, the campus held the 2018 Election of Faculty Regent Forum at the Malcolm Hall Theater.

The forum was the venue for candidates to present their plans and answer questions from the audience.  Those who viewed the forum’s live stream were also able to field questions.

Most of the concerns raised were about faculty welfare and tenure.

Tenured appointment.  Salvador said all policies should be stated, must be transparent and must be followed.  He suggested all departments be required to state tenure rules.  If collegiality is a condition for tenure, Salvador said gray areas must be quantified so no issues could be politicized.

Guillermo, on the other hand, called on the junior faculty to band together and share their experiences and be aware of the provisions in the Faculty Manual.  In doing so, the junior faculty would know their rights thus preventing any abuse of policies.

Collegiality.  Salvador said, “collegiality means we agree to disagree but at the end of the day we’re still agreeable.  There are things that are academic in issues we will have differences in opinion but when we do our work we just back it up with facts.  At the end of the day, you don’t agree with me but these are my findings.  If there is somebody from a different school of thought and you like to get that guy out that is not a way for university progress.  We are tested on ideas not on personalities.  If it stands the test then we should be okay.” 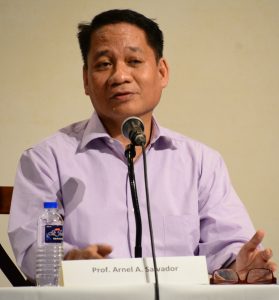 Filipino and Panitikan.  With news on the Supreme Court’s decision to uphold the Commission on Higher Education’s 2013 memorandum on the exclusion of Filipino and Panitikan (Philippine Literature) as core subjects in college, the two candidates were also asked their opinion on the issue.

Both agreed that Filipino and Panitikan are very important in college.

Salvador said it is very important for Filipinos to learn their language, “When I went abroad, I was asked ‘What makes you a Filipino? How are you different from the Thai, from the Indonesian?  It all goes back to what is our heritage, what is our culture?  I think it’s important to learn Filipino.  People should learn our language.  There are things that you cannot translate into English.  There are emotions that will never be replicated by another language.”

Meanwhile, Guillermo said the issue hits very close to home.  He urged the university to oppose the Supreme Court and say its decision is wrong.  He believed that as an academic community, UP must be able to clearly communicate the knowledge learned in the university to the general public, and the way to do this is by communicating in Filipino.

Of 241 eligible UPD faculty members nominated to the post, five were top ranking.  Of the five, two declined the nomination leaving professors Guillermo, Salvador and Paz to vie for the post.

As per OVPAA Memorandum No. 2018-96, synchronized canvassing of votes “will be done at the same time across the UP System” after 4 p.m. today, Nov. 15.