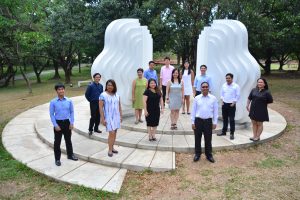 (APR. 21)—UP Diliman’s long standing tradition of honor and excellence takes center stage in Linggo ng Parangal, a week-long festivity to recognize the outstanding performance of its faculty, Research and Extension Professional Staff (REPS), students, staff and the community.

The festivities, slated from April 24 to 28, carry the theme “Banyuhay”—based on “bagong anyo ng buhay” (metamorphosis).

Sir Anril P. Tiatco, chair of the festivities’ Committee on Publications, Promotions and Documentation, explains the theme as: “The process of change through dynamic connections, in conjunction with adaptation, is what invigorates the University’s growth, development and stability. With the changes—both significant and minor—wrought by the indefatigable passage of time, the zealousness of the University to serve the nation and to discover knowledge to uplift the nation never fades.”

Opening the week is Seremonya ng Pagbubukas at the UP Lagoon at 6 p.m., Monday, April 24, where the UPD Chancellor Michael L. Tan introduces the recipients of the Gawad Tsanselor 2017. The award, UPD’s most prestigious distinction for performance excellence in six categories, will be given to 13 individuals and a residential area on campus.

However, the Gawad Tsanselor 2017 program slated for Friday, April 28 has been moved to Thursday, April 27, 6 p.m. at the Institute of Biology Auditorium due to Pres. Duterte’s Memorandum Circular 18 declaring April 28 a non-working holiday for government and private offices in Metro Manila due to the ASEAN Summit and Related Meetings.

Gawad Tsanselor. In the Natatanging Guro category, the winners are Prof. Patrick F. Campos of the Film Institute of the College of Mass Communication; Dr. Maria Cecilia Gastardo-Conaco of the Department of Psychology, College of Social Sciences and Philosophy (CSSP); and Dr. Jonas P. Quilang, Institute of Biology (IB), College of Science (CS).

Dr. Ma. Crisanta N. Flores of the Department of Filipino and Philippine Literature of the College of Arts and Letters (CAL) is the sole Natatanging Mananaliksik sa Filipino awardee.

The three recipients of the Natatanging REPS are Davin edric V. Adao of CS’s IB; Christian Joy P. Cruz of the CSSP’s Population Institute; and Eimee Rhea C. Lagrama of the University Library.

Two administrative staff have been chosen as Natatanging Kawani: Eric D. Juanillo of CAL and Shirley R. Simbria-Arandia of the UPD Information Office.

Four students have been chosen as Natatanging Mag-aaral. They are: Katherine Adrielle R. Bersola of the College of Human Kinetics; Williard Joshua D. Jose and Dave E. Ramos, both from the College of Engineering; and Jose Rafael L. Toribio of the Cesar E.A. Virata School of Business.

Capping the list of awardees is Hardin ng Doña Aurora, which was chosen as Natatanging Pook.

Extension program.  On Tuesday, April 25, the Office of the Vice Chancellor for Research and Development will recognize extension programs of both academic and administrative units with significant contributions towards achieving the mandates of the unit and the university in the Parangal para sa Programang Pang-Ekstensiyon 2017 from 9 a.m. to 12 noon at the College of Law’s Malcolm Theater.

Retirees and service awardees. On Wednesday, April 26, the contributions of 99 university personnel who retired in the previous year and 21 service awardees will be recognized in the program Parangal para sa mga Retirado at Gawad Paglilingkod to be held from 2 to 5 p.m. at the GT-Toyota Auditorium of the Asian Center.

Student achievers. University Scholars (US) in the undergraduate and graduate levels and students who distinguished themselves in various fields in 2016 will be recognized at the Parangal sa Mag-aaral at the UP Theater at 2 p.m. on Thursday, April 27.

University Scholars are students who have earned a General Weighted Average (GWA) of not lower than 1.25 for the period in review, the second semester of Academic Year (AY) 2015-2016 and first semester of AY 2016-2017.