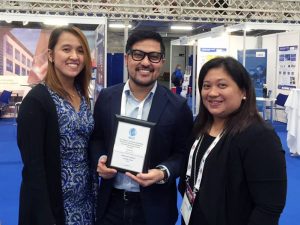 To date, UPD’s 5-year BSFT program is the only IUFoST-accredited program in the Philippines. The recognition was officially announced during the 18th World Congress of Food Science and Technology held in Dublin, Ireland on Aug 25. The accreditation is from 2016 to 2021.

The IUFoST is the global scientific organization representing over 300,000 food scientists and technologists from more than 75 countries. IUFoST is a full scientific member of ICSU (International Council for Science) and it represents food science and technology to international organizations such as WHO, FAO, UNDP and others. The IUFoST aims to stimulate the ongoing exchange of knowledge in scientific disciplines and technologies relating to the expansion, improvement, distribution and conservation of the world’s food supply.

Prior to the formal announcement, representatives of the IUFoST conducted an audit of the program, through the assistance of the Philippine Association of Food Technologists, Inc. Criteria for accreditation included the inclusion of hallmark disciplines of Food Science and Technology such as food chemistry, analysis and nutrition; food microbiology, safety and environment; and food engineering and technology in the program. Other criteria are interaction of the program with the local food industry, government, and non-government organizations; faculty profiles, researches, and publications; and facilities such as teaching laboratories, pilot food plant/processing capabilities, and resource materials in libraries.