(FEB. 10) — Artists from the University of the Philippines Diliman (UPD) were among those recognized at the first SUDI Awards of the National Commission for Culture and the Arts (NCCA).

These are Prof. Josefino “Chino” Toledo, PhD, from the College of Music (CMu), and performing groups UP Singing Ambassadors (UPSA) and UP Madrigal Singers (MADZ).

Toledo. The current director of the UP Symphonic Orchestra, Toledo is a faculty at the CMu Department of Composition and Theory and executive director of Miriam College Center for Applied Music. He is noted for premiering works of Filipino composers as well as other Asian composers and has conducted concerts in Japan, Indonesia, Australia, and China.

Toledo is cited in the New Grove Dictionary of Music and Musicians (UK); 20th Century Composers of Asia (Japan); Komponisten der Gegenwart (Germany); Philippine Encyclopedia for the Arts; Who’s Who in International Music (England); and Who’s Who in Australasia and Far East (England). 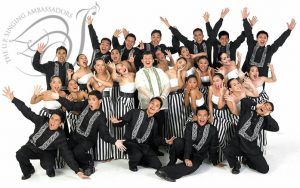 UPSA.  Founded on Aug. 12, 1980 by CMu conductor Ed Manguiat, UPSA is one of the Philippines’ foremost choral groups. It has earned for the country several grand prizes, first prizes and other awards in at least 20 international competitions. UPSA has won the Grand Prize in the Concorso Polifonico Internazionale Guido d’Arezzo (International Polyphonic Competition) in Italy twice (2001 and 2018), and is the first Asian choir to win.  It is also one of only five Filipino choirs to attain eligibility to contend in the European Grand Prix, the Olympics of choral singing, in 2002 and 2019.

UPSA also has outreach programs and fundraising activities for the sick, orphaned and needy.

MADZ.  Founded by National Artist for Music and former CMu faculty Prof. Andrea O. Veneracion, MADZ is one of the world’s most awarded choral groups, having consistently won all the top prizes in most of the world’s prestigious choral competitions. They hold the distinction of being the first choir in the world to win the highly-acclaimed European Grand Prix for Choral Singing (1997 and 2007).

MADZ’ virtuosity over a wide repertoire range, its continuing promotion of Filipino choral works, and the stirring and passionate impact each performance left on its audience all over the world have established their reputation as a pioneering force in choral music and an inspiration for other choirs. The group is presently conducted by Prof. Mark Anthony Carpio of the CMu Choral Conducting Department.

Nono, an ethnomusicologist, artist and cultural worker, received her Bachelor in Humanities and Master in Philippine Studies from UPD. She received a second master in Religious and Gender Studies from Yale Divinity School, and her doctorate in Ethnomusicology from New York University.

As a cultural worker, Nono founded the Tao Foundation for Culture and Arts, a Philippine non-government organization engaged in cultural regeneration initiatives, in 1994. The Tao Foundation currently runs the Agusan del Sur-School of Living Traditions, and the PAMATI Summer Encounters.

Singer and musician Cabangon is known for his socially-relevant songs and for forming the group “Buklod” in 1987 together with Rene Boncocan and Rom Dongeto. The group produced three albums: “Bukid at Buhay,” “Tatsulok” and “Sa Kandungan ng Kalikasan.”

He started his career at 10 years old at his hometown of Rosario, La Union.  Cabangon then brought his music to Baguio and later to Manila and Quezon City, where he took classical guitar lessons at CMu under Gerry Duran of Acoustic Jive.

Dancel is a pop rock musician and former lead vocalist of the band Sugarfree from 1999 to 2011.  It was during his college days in UPD when Dancel started to compose his own music.

CMu alumni Michelle Pascual (soprano), Joshua Fernandez Cadelinia (tenor) and Ronnel Laderas (bass) through their group Acapellago were also recognized by SUDI Awards.  Acapellago is a 5-member group known for its a cappella genre. The quintet is already a world-class act.  Their recent championships were in the Moscow Spring A cappella Festival (2019) and Vocal Asia Festival in Japan (2019).

In the succeeding years, recognition for excellent and significant musical contributions will be conducted annually.

The 2021 awarding ceremonies will soon be streamed across NCCA’s social media platforms.