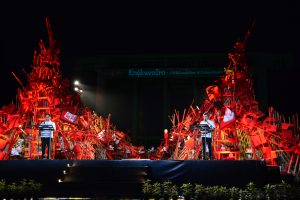 (FEB. 2)—Feb. 1, 5:30 p.m. was a somber evening of poetry and song as UP Diliman (UPD) opened its annual Arts and Culture Festival (ACF) with “Barikada Singkwenta: Pagpupugay at Paggunita (a late afternoon vigil)” near the Oblation Plaza to commemorate the 50th anniversary of the Diliman Commune.

The Diliman Commune was a movement of protest by UP students and faculty in solidarity with striking jeepney drivers who denounced the increase of oil price held from Feb. 1 to 9, 1971. The first barricades were set up at University Avenue to stop the entry of vehicles into the campus. 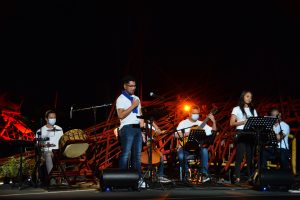 UPD Office for Initiatives in Culture and the Arts (OICA) Director Cecilia de la Paz opened the pre-program portion with a brief rationale and description of this year’s festival entitled Engkwentro: UPD Arts and Culture Festival 2021, which celebrates two historic “encounters,” the 50th anniversary of the Diliman Commune and the 5th centenary of the Triumph at the Battle of Mactan and of the Christianization of the Philippines. 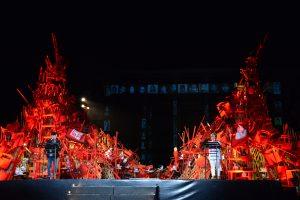 Then a drone shot of the brightly lit art installation “Barikada,” a massive art installation composed of bamboo and old wooden chairs in front of the Oblation Plaza which served as stage and backdrop, was shown followed by a video interview with UP alumnus and artist Abdulmari “Toym” de Leon Imao Jr. describing its origins and how it depicts the Diliman Commune.

The video then cut to UP President Danilo Concepcion on stage, who emphasized the importance of remembering the two historic events. He was followed by UPD Chancellor Fidel R. Nemenzo, who said even those who did not participate in the Diliman Commune will learn a lot from the celebrations. 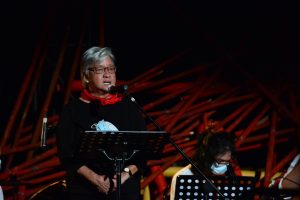 This was followed by an Omnibus Video consisting of various shots of important landmarks such as Palma Hall, Quezon Hall and the Sunken Garden superimposed with scans of newspaper articles and photos from that time. The video also contained audio testimonies from several “communards,” recounting their memories of the historic time. 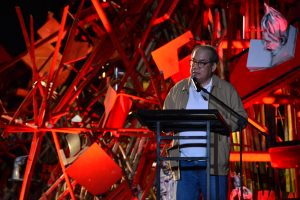 Playwright and activist Bonifacio Ilagan then appeared on stage to read a letter from the family of Pastor Mesina Jr., a student who was killed during the Commune by mathematics professor Inocentes Campos when he opened fire after protesting students threw pillboxes at his car. 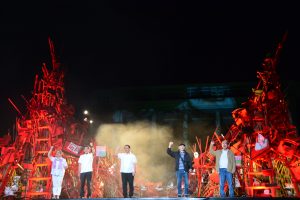 The next segment was a dramatic reading of the poem “Kung Kami’y Magkakapit Bisig: Mga Tula sa Hacienda Luisita” by Gelacio Guillermo Jr. translated into Filipino by Jose F. Lacaba and delivered/performed by Ilagan and Prof. Rowena Daroy Morales from the College of Law.

As the poem was nearing its close, photos of students who participated in the Diliman Commune were projected onto the facade of Quezon Hall. Morales and Ilagan then proceeded to talk about their experiences as students in the thick of the activities of the Diliman Commune. 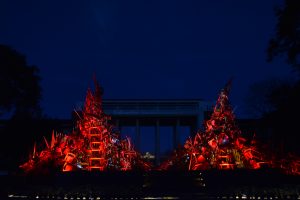 Ilagan concluded his prepared message and the words “NO TO RED TAGGING” were projected onto the stone columns of Quezon Hall lobby.

Tapati and De Leon then sang “Paglikas” by Fidel Rillo, music by Ronnie Quesada, arranged by Jamisolamin and accompanied by Jamisolamin, Delos Santos, Sarreal and Duffort.

Dalisay then read Ilagan’s Filipino translation of an excerpt from “An Open Letter to Filipino Artists” by Emmanuel Lacaba. As he concluded, the Carillon bells were rung 14 times. The camera then cut to all the speakers onstage holding aloft placards, which they then added to Barikada.

Boni Ilagan began singing the opening lines of protest song “Internasyonal” arranged by Jamisolamin. He was soon joined by De Leon, Tapati and the other speakers present. They then concluded the program by singing “UP Naming Mahal.”

Engkwentro is organized by the UPD Office of the Chancellor through OICA, will run from February to April and will span a multitude of activities ranging from webinars, art exhibitions, live performances to public art.