UP Spikers end first round with a bang!

(MAR. 3)—The UP Volleyball Teams ended the first round of the University Athletic Association of the Philippines (UAAP) Season 78 volleyball tournament with victories over their respective opponents.

Riding high from their win against the University of Santo Tomas last Feb. 28, the UP Women’s Volleyball Team demolished the National University (NU) Lady Bulldogs in 3-straight sets 25-19, 25-21, 25-20 at the FilOil Arena in San Juan on Mar. 2.

Rookie Isabel Molde paced UP with 13 points coming from 12 attacks and one block. Veteran Nicole Tiamzon, who sealed the game for the Lady Maroons with a service ace in the third set, also contributed 13 points. The win put the Lady Maroons in third spot with a 4-3 record.

Meanwhile, the UP Men’s Volleyball Team also ended the first round of the elimination on a positive note by beating the University of East Warriors in five grueling sets last Feb. 28. 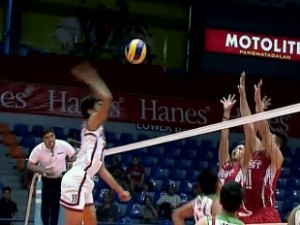 The UP Men’s Team currently ranked fifth with a 4-3 record.