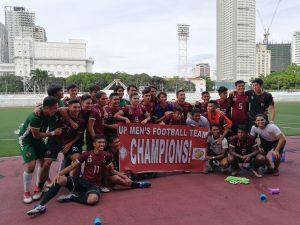 (MAY 3)— In a do or die game, the UP Men’s Football Team (UPMFT) goaled their way to victory and reclaimed the UAAP Season 80 crown against the University of Santo Tomas Golden Booters.

The UPMFT scored a 1-0 win at the championship match held at the Rizal Memorial Stadium today when skipper Ian Clarino released a kick in the 21st minute powerful enough to penetrate the goal that totally escaped the vigilant eye of UST’s goalkeeper Zaldy Abraham Jr.

According to the Tiebreaker Times report, UP was able to maintain control of the game despite the aggressive efforts of UST throughout the game.

Clarino was awarded Most Valuable Player while UP’s Fidel Tacardon was named Rookie of the Year. 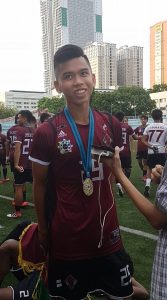 Tacardon, Season 80 Rookie of the Year

Maroon Pride; Nowhere to go but UP