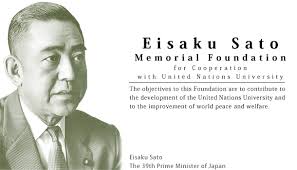 The Eisaku Sato Essay Contest is an international competition established in memory of former Prime Minister of Japan Eisaku Sato. The contest opened in 1980 and is held annually except from 1986 to 1989.

Osorio’s piece “Transforming Momentum into Propulsion: Harnessing the Demographic Tsunami” was about pressing issues such as the rise of populist governments, widening economic inequalities and the problem of international refugees. His offered solutions proposed maximizing the use of information and communication technologies (ICTs) in development and implementing changes in international policy mindset.

Osorio said “instead of designating the phenomenon as a ‘demographic tsunami,’ it should be considered instead as ‘demographic propulsion,’ signifying a collective, global drive to move forward for inclusive, sustainable development.”

Osorio drew his ideas for his essay from his professional experience as a former Legal Intern for the United Nations Khmer Rouge Trials and Researcher for Asian Development Bank, and his many volunteer engagements.

Osorio, a youth leader and development advocate, is also a Research Associate at the UP College of Law Institute of International Legal Studies.

The contest is organized by the Eisaku Sato Memorial Foundation for Cooperation, in partnership with the United Nations University (UNU). The foundation was established by Sato with the monetary award he received with his 1974 Nobel Peace Prize.

Osorio shares the prize with Masami Utsumi, an office worker, Saki Mizoroki, a graduate of University of California Berkeley, and Ian Karusigarira, a PhD student at Tokyo University of Foreign Studies. Osorio is the first Filipino to win in the contest.

The awarding ceremony was held on Oct. 23 at the UNU. (Osorio’s picture is from his Facebook account)