UP Law is “back to normal” 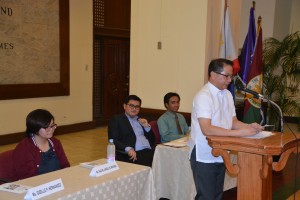 At the celebration of the 2015 Bar Examination passers, current UP College of Law Dean Danilo L. Concepcion quoted the text message of former Dean Merlin M. Magallona, “It is good to hear that we are back to normal.”

The text message was sent to Concepcion after Magallona learned that the UP College of Law is the top performing school in last year’s bar examination, garnering a passing rate of 89.73 percent, and that UP notched first and three other top ten places.

“We congratulate all the passers,” Concepcion said. “We broke the record after 10 years. We are happy of these results. No, we are not happy. We are proud of these results,” exclaimed Concepcion along with the cheers of the passers, faculty, students, alumni and staff of the College during the testimonial dinner for the passers last May 4 at the Malcolm Hall lobby. 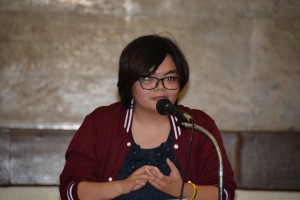 The last time UP College of Law was the top performing school and a graduate notched the top position was in 2005.

Out of the 146 takers from UP, 131 passed the examination. Rachel Angeli B. Miranda topped the 2015 Bar with a rating of 87.40 percent. Other UP examinees who placed in the top 10 were Jayson C. Aguilar, third place (86.75 percent); Giselle P. Hernandez, sixth place (86.10 percent) and Jedd Brian R. Hernandez, ninth place (85.80 percent). Concepcion clarified that the two Hernandezes are not related which elicited laughter from the crowd.

In their responses, Miranda, Aguilar and Jedd had a common statement. “I only prayed to pass the Bar. I did not expect to be in the top 10,” each of them said. Giselle was not present at the dinner due to work.

“I aspire to be a better person. I urge my batchmates to be greater than what we think we can become or achieve,” Miranda said. “I learned to strive even during the darkest nights or the deepest disappointments.”

For Aguilar, “the Bar taught me a lesson on humility. We read books not written by UP professors, we study reviewers not prepared by UP professors and we heed the advice of law students who are not from UP.” 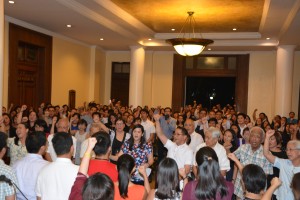 UP Law community singing UP Naming Mahal led by its choral group, UP Charivari

“I am thankful for the difficult discussions with our professors. I thank them for the tough love during all our years here in the College to prepare us to become lawyers,” Jedd said. “I encourage my fellow passers to make a difference in the world.”

Concepcion also acknowledged the assistance given by the student organizations – the Law Student Government and the Bar Operations Commission.