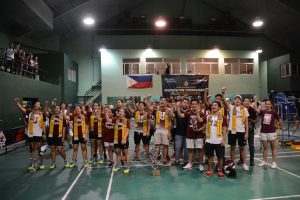 Determined to defend their title and clinch a 3-peat, the UP Lady Shuttlers mustered all their energy to conquer Ateneo Lady Shuttlers, 3-1, in Game 3 of the UAAP Season 79 Women’s Badminton Best-of-3 Finals, Oct. 15 at the Rizal Memorial Badminton Hall, Manila.

In the second singles match, UP’s Gelita Castilo cruised through the first set against Ateneo’s Samantha Louise Ramos, 21-14. In the second set, Castilo needed extended time as Ramos erased the four-point mid-match deficit, 16-12, and tied the set at 20. There were exchanges of great placement and smash shots, before veteran Castilo emerged triumphant, 24-22.

Tied at one match each and with the title at stake, the team tie format (best of five matches) and the next two doubles matches showed UP was the more determined and “hungrier” team.

In the first doubles match, UP’s Malvinne Ann Venice Alcala and Jessie Francisco wasted no time in defeating Ateneo’s Patrisha Edricka Malibiran and Ramos. With good lateral movements, impressive smashes and tricky placement shots, the UP pair did not let Ateneo taste a lead in the whole match and finished it in two sets, 21-15, 21-17. 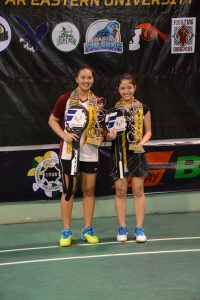 (left) MVP Alcala and Rookie of the Year Lunod

The second UP pair of Castilo and Eleonor Christine Inlayo had more difficulty in the second doubles match. Ateneo’s Carlos and Joelle Geva de Vera snatched the first set in a thrilling end, after UP lost its three point lead, 18-15, and having the set tied at 20. With Ateneo serving at 21-all, the Lady Eagles secured the next two points, ending the set at 21-23. After the time-out, the Lady Maroons dominated the next two sets from start to end with good defense and great returns of smashes and drop shots, winning the match with identical marks, 21-12, 21-12.

After earning the last point, the UP gallery erupted in celebration with the UP Women’s Badminton Team (WBT) rushing to the court as the dream of a 3-peat was realized.

Capping the celebration was Alcala, UP WBT’s team captain, receiving the MVP award, while Ateneo’s Chanelle Lunod was Rookie of the Year. De La Salle University was second runner-up after winning over University of Santo Tomas.

Alcala said after their Game 1 loss, which ended their 25-tie winning streak, “I said to myself I will do everything to protect the title. That has been my mindset since that loss. We also believe in each other. We are glad that the team tie worked for us.” The team tie, or the players that will be assigned for the five matches (two singles, two doubles, one single), were, for UP WBT, determined by the coaches, managers and players themselves.

Before the deciding Game 3, Coach Melvin Llanes told his team to stay humble, stay focused and most of all, to have the deeper desire to win than their opponent. After the celebration, “we will return back to our training in preparation for next season.” Llanes also hopes they can have international exposures in the future.

The court celebration ended with the singing of UP Naming Mahal, the players leading the crowd.