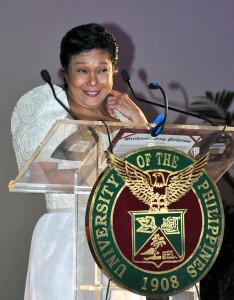 (SEPT. 1)— She was petite with dark skin tone and very humble but, she was the brightest star that afternoon.

Veteran actress Nora Cabaltera Villamayor, more popularly known as Nora Aunor, arrived at the UP Film Institute Cine Adarna on Aug. 27 dressed in a pristine white Filipiniana attire that elegantly fit her small frame. She was honored by the UP College of Mass Communication as the 10th recipient of the prestigious UP Gawad Plaridel Award for her excellence in film and television.

Aunor was accompanied by her colleagues and friends, among them, award-winning scriptwriter Ricky Lee and multi-awarded film director Joel Lamangan.

As she marched to her seat during the processional, hundreds of loyal fans known as “Noranians,” gave her a standing ovation. Among the guests were National Artist for Literature Dr. Bienvenido Lumbera, members of the Board of Regents and the UP officials, faculty, staff and students, and guests from other universities.

When the Superstar went up the stage to accept the award, the Noranians almost shook Cine Adarna with their thunderous applause while some were on the verge of tears, feeling very proud of their idol.

Instead of a lecture, Aunor shared stories about her life from the time she was still struggling to help her family make ends meet, to the time she joined the “Tawag ng Tanghalan,” and until she became a multi-awarded actress. She also shared insights on her passion for making quality films that influenced her to venture into producing movies.

Aunor confessed that she has never attended an acting workshop although she thinks it is important. She said sometimes the actors would discover for themselves their own strategy on how to portray a certain role. What is important, she said, “Hangga’t maaari po, ang bawat karakter ko ay hindi dapat pareho sa karakter ko sa ibang pelikula.”

The Gawad Plaridel, named after the Philippine hero Marcelo H. del Pilar’s nom de plume, Plaridel, is the College of Mass Communication’s (CMC) distinction for Filipino media practitioners who have excelled in any of the media (print, radio, film and television) and have performed with the highest level of professional integrity in the interest of public service. 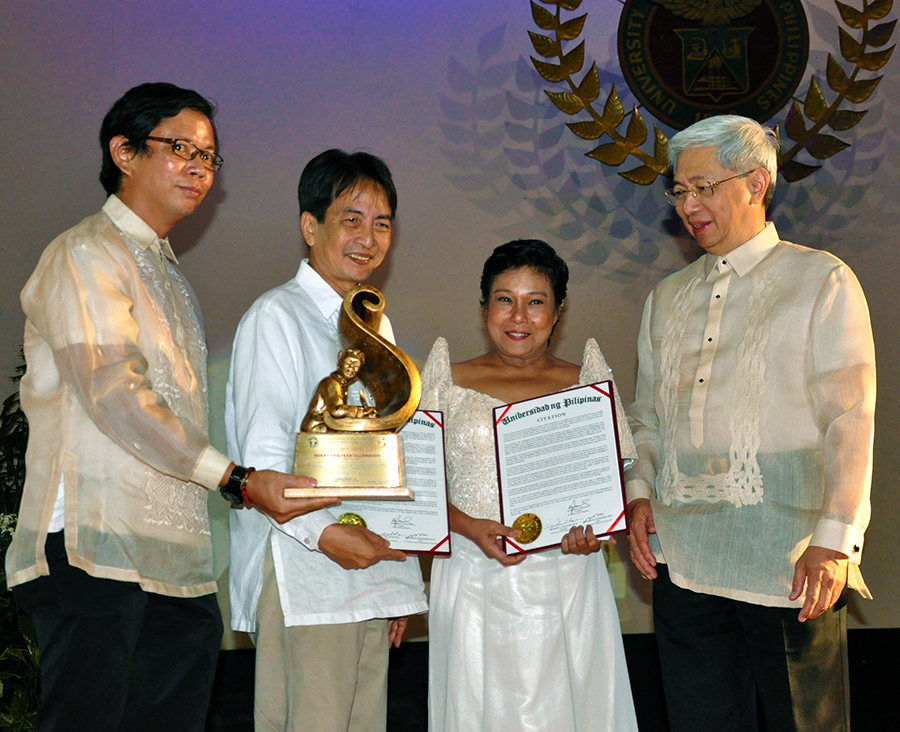 CMC recognized Aunor for her “unique artistry and versatility as a singer” and for “portraying with keen intelligence and uncommon sensitivity an amazing range of cinematic roles.”

Aunor was also recognized for starring in memorable and long-running television programs like the variety show “Nora Aunor Show” and “Superstar” that showcased her skills in singing and dancing that set a trend in Philippine television, and the weekly drama anthology “Nora Cinderella” at “Ang Makulay na Daigdig ni Nora” that brought to the public both fine and dramatic acting and relevant narratives of everyday life.

She was also recognized for using her “tremendous popularity as an opportunity to help the masses…appreciate films and plays that dramatized and analyzed the abject conditions of the Filipino majority and the poor and powerless characters that she played with conviction.”

During the program, an audio-visual presentation in honor of Aunor was shown to the audience. It was directed by CMC Professor and UPFI director Prof. Roehl Jamon.

The UP Concert Chorus and UP SAMASKOM provided the intermission numbers. — With reports from the UP College of Mass Communication