UP Diliman Month 2017: A celebration of folklore as art and study 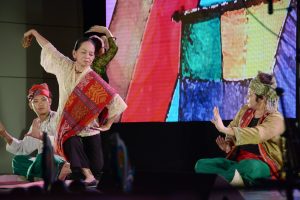 With 7,641 islands and over 100 ethnolinguistic groups, the wealth of the Philippines’ folklore was at the heart of UP Diliman (UPD) Month 2017, with activities in both the visual and performing arts as well as a full academic conference devoted to the subject in the whole of February.

Carrying the theme “Salaysayan: K’wentong Bayan, Kaalamang Bayan,” the celebrations aimed to create a deeper understanding of folklore, show that depository of knowledge and translate it to various forms of art.

Sir Anril P. Tiatco, theatre arts professor from the College of Arts and Letters (CAL) and the festival’s project leader defined folklore as “an oral tradition told from one generation to another during community ceremonies, rituals and in everyday conversation and storytelling among a group of individuals…often used to explain aspects of traditions, norms and even histories. In folklore studies, the kuwentong bayan are means of artistic communication in small groups.”

Opening. UP Diliman Month began on a rainy Wednesday night (Feb. 1) at the UP Lagoon opposite the former Faculty Center. 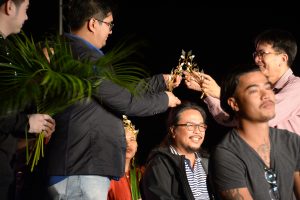 Leo Abaya being crowned and showered in petals during the opening ceremonies.

The stormy weather foreshadowed the opening number “Tudyuhan ng Dalawang Diyos,” recounting a conflict between the water goddess Magwayen (played by Krystl Buesa) and the sky god Makaptan (played by Nil’s Flores) that led to the creation of the world.

The rest of the number was portrayed by the UP Filipiniana Dance Group (UPFDG) with Val Dominic Gagatiga and Jowin Panizal of the UP College of Music (CMu) as the chorus. 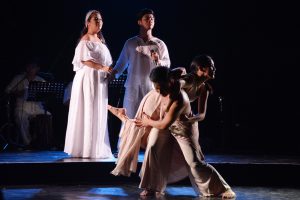 The highlight of the night was a “pagpuputong” ceremony held to honor the seven artists that created “Sansinukob,” an installation art exhibit at the UP Lagoon, UP Amphitheater and College of Mass Communication Hill.

Five of the seven artists were seated on stage while UPD Chancellor Michael L. Tan and Office for Initiatives in Culture and the Arts Director Sir Anril P. Tiatco presented each with a crown, a palm leaf and covered him/her with petals. 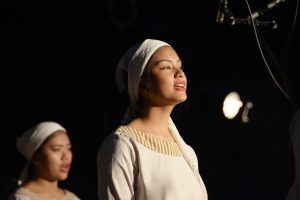 Members of the UP Cherubim and Seraphim.

In the background, three “Magpuputong” women from Marinduque performed an especially composed welcome song accompanied by Profs. Eman Jamisolamin and Lester Demetillo from the CMu on guitar.

The night ended with the UPFDG and select CMu students interpreting the Visayan legend of Sikalak and Sikabay, the first man and woman on earth who were born when a single bamboo trunk split in half.

Playing the parts of Sikalak were Jeconiah Retulla (dance) and Jowil Panizal (voice) while Sikabay was played by Katrina Saga (dance) and Coleen de Guzman (voice).

The ceremony was followed by a guided tour of the six Sansinukob exhibits.

Folklore in many forms. The second week, the UP Film Institute’s Cine Adarna held “K’wentong Bayan sa Pelikula,” a film festival that featured folklore as a common element. Works like “Ang Panggagahasa kay Fe,” “Ploning,” “K’na the Dreamweaver” and “Sayaw ng Dalawang Kaliwang Paa” were shown from Feb. 7 to 9. 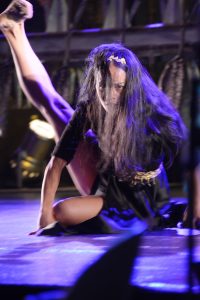 Himigsikan, a live concert series that has long been part of UPD Month, featured popular folk artists Noel Cabangon (Feb. 10) and Bayang Barrios (Feb. 24) at the Canopy of the UP Theater.

In the third week, Dulaang UP, the University’s official theater organization, staged Johann Wolfgang von Goethe’s FAUST, based on a classic German folktale of a scholar who makes a deal with the devil, exchanging his soul for unlimited knowledge and worldly pleasures. The play runs from Feb. 22 to Mar. 15 at the Wilfrido Ma. Guerrero Theatre.

From Feb. 18 to 19, Teatrong Mulat ng Pilipinas, another official performing group of the University that specializes in puppet theater, staged “Sita & Rama: Puppet Ramayana,” based on the popular Indian epic Ramayana.

The academic component of the festival was the “Sampaksaan sa K’wentong Bayan” held on Feb. 23 at the UP NISMED Auditorium by the College of Social Sciences and Philosophy. It featured multi-modal and cross-disciplinal discussions on the significance of the k’wentong bayan in the context of contemporary Philippines with former National Commission for Culture and the Arts chair Felipe de Leon Jr. as keynote speaker.

The UP Dance Company, an Official Student Performing Arts Group of UP Diliman, staged a dance performance of Rody Vera’s “Ang Unang Aswang” from Feb. 25 to 26 at the Arki Auditorium. The one-act play is about a feral girl, born and raised in the forest, who experiences the ecstasy of romantic love and the pain of rejection at the hand of a stranger.

Balangay. UP Diliman Month 2017 ended with program “Balangay,” held Feb. 28, 6 p.m. before a packed audience at the GT Toyota Auditorium. 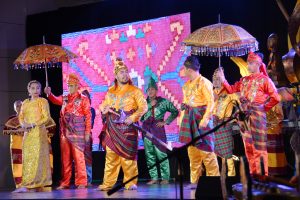 “Balangay” refers to a large boat made by pre-colonial Filipinos for cargo and raiding purposes, from which the word “barangay” is derived. At the center of the stage was a sculpture of a balangay by multimedia artist and UPD alumnus Toym Imao.

The ceremony began with a prologue: a haunting chant by CAL student Roger Federico, who was clad in traditional Cordilleran garb.

This was followed by “Pag-aalay” by Ramon Magsaysay Awardee Ligaya Fernando-Amilbangsa with the AlunAlun Dance Circle featuring a performance of Pangalay.

Pangalay or “the gift/offering,” is a dance that predates Islam and Christianity in the Philippines. According to the program, it has the richest movement vocabulary among Philippine indigenous dances and can be danced with many types of music.

From the mountains of Cordillera, the stage was turned to Panay Island as UP Visayas Professor Emeritus Alicia Magos told the epic tale of Amburukay, an old ugly woman who demanded payment from Datu Labaw Donggon for the theft of her gold pubic hair.

Before the act representing Mindanao went on stage, Dean Macrina Morados of the Institute of Islamic Studies introduced Mindanao folklore by telling how the Maranaw saw the universe as two parts: the earth and the sky, each made up of seven layers.

Each of those layers is inhabited by various beings. While the lower layers were inhabited by beings like Karibanga (similar to dwarves), humans existed at the very top layer.

One such human was a young man named Pilandok, whose adventures were the topic of the next performer, Cultural Center of the Philippines Gawad Awardee Sining Kambayoka Ensemble.

Official Student Performing Arts Groups of UP Diliman cap off the closing ceremonies.

They brought the house down with their rousing rendition of Pilandok’s adventures and how through cleverness and quick thinking he went from being tossed into the ocean in a cage to rescuing the Sultan’s daughter and almost inheriting the kingdom.

The Sining Kambayoka Ensemble is the resident Theater Company of Mindanao State University-Marawi City and specializes in folk theater employing the Kambayoka Theater Form which is based on the Maranao Bayok (love song) and Darangen which are sung.

Accompanied by the lively sounds of the Kulintang, the troupe members sang, danced and transformed into the various characters and mythical beings on stage, much to the audience’s delight.

Tan promised to continue the linkages with other state colleges and universities that were formed during UP Diliman Month 2017.

As the program closed it was time for UPD to showcase its best, with the Official Student Performing Arts Groups of UP Diliman—UP Concert Chorus, UP Dance Company, UP Kontra-GaPi, UP Repertory Company, UP Streetdance Club, UP Singing Ambassadors and the UP Symphonic Band—coming together for a rendition of “Tayog ng Haraya,” the theme song composed for UP Diliman Month 2016.