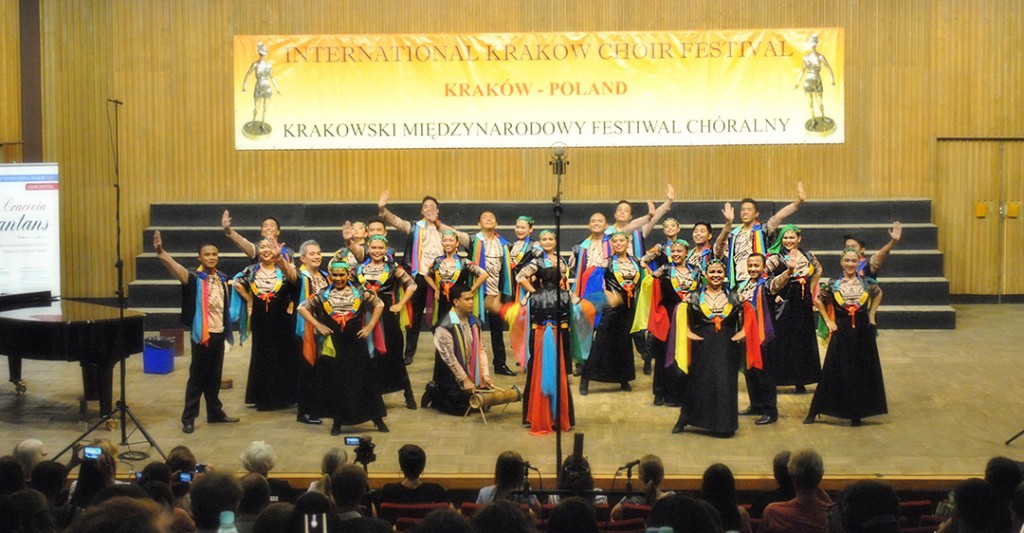 (JUN. 26)—For centuries, the grand theaters of Europe have been filled with the music of the world’s most accomplished singers. In Krakow, Poland last weekend, Filipinos’ voices took flight and soared.

At the 6th Krakow International Choir Festival, the University of the Philippines Concert Chorus (UPCC) chanted, sang and belted their way to winning the Grand Prix, the highest award given to the best choir of the festival. The honor came with €2,000 and a golden statuette of Polyhymnia, the muse of choral art.

With artistic director Jai Sabas-Aracama at its helm, the UPCC won in two categories: first prize in Category A (Mixed Choir Adults), where they sang “Abendlied” by Josef Gabriel Rheinberger, “Ummah Sallih”by John Pamintuan, “Elijah Rock” by Moses Hogen, and “Esto Les Digo” by Kinley Lange; and second prize in Category F (Popular, Folk, Gospel and Barbershop Music), where they performed “Kruhay” by Benny Castillon, “Bagong Umaga” by Mike Villegas and Bayang Barrios, “Hataw Na” by George Black, and “Let It Be” by John Lennon and Paul McCartney. The competition had a total of nine categories and was participated in by choirs from 10 countries.

UPCC, the only Asian choir in a sea of Europeans and Americans, got the nod of a respected jury of world-renowned conductors and composers: Poland’s Romuald Twardowski, Japan’s Ko Matsushita, Spain’s Javier Busto, Russia’s Irina Roganova, and Latvia’s Rihards Dubra.

While the UPCC has a plethora of international recognitions already tucked under its belt, its president, Lesley Maye Fabros, admitted that they could not rest on their laurels. For one, European choirs are known for their clear, mellifluous singing — a contrast to UPCC’s signature full and rich sound. There were also jitters owing to the fact that aside from rehearsing for the competition, the UPCC had been performing almost nightly in a series of concerts in Italy, Austria and Switzerland since leaving Manila on May 20. With their throats steeped in frigid environments and utilized every single day, the choir’s members fought to sustain their prize-winning singing voices.

The tension onstage was dispelled when the audience applauded energetically after every song the group performed — a rare occurrence during choral competitions where the obligatory applause usually comes only after the whole set, and where there is a time limit that could threaten the group’s average score. Fabros was later on told that word spread about UPCC’s successful performance for Category A in the morning, so more people came to watch in the afternoon when they performed for Category F.

The choir did not only dazzle the audience, it earned the approval of its opponents. Part of the festival was a concert held the evening before the competition, where UPCC performed in front of its would-be competitors. The Filipino choir was given a standing ovation by the whole audience.

The music does not end there for the UPCC as it continues its tour of Europe, and eventually the United States, conquering the world a song at a time.