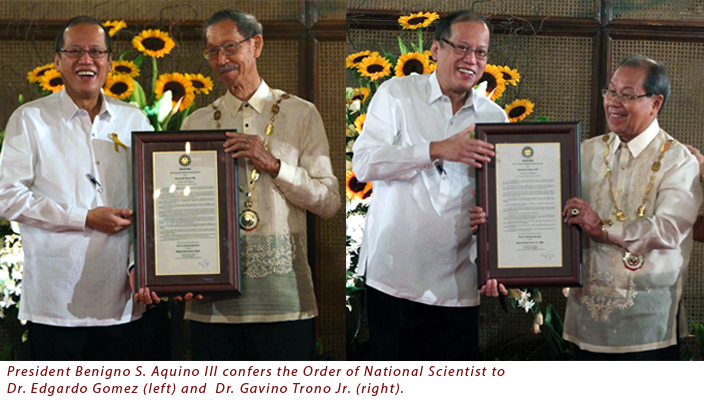 The order of National Scientist is the highest honor given by the President of the Philippines to individuals who have made exemplary and significant contributions to the development of science and technology in the country.

Gomez is distinguished for his outstanding contributions to science particularly his research on marine ecosystems which became the bases for management of and the conservation programs for the country’s marine resources.

Gomez is the founding director of the internationally acclaimed UP MSI and served at the helm from July 1974 until April 1999. He mentored outstanding graduate students, many of whom were later on invited to the Institute’s faculty.

His works in coral reef assessment paved way for the establishment of international conservation initiatives such as the Global Coral Reef Monitoring Network, Global Reefs and Risk Analysis, and the International Coral Reef Action.

As expert in the field of marine science, Gomez received numerous prestigious awards, among them: the Global 500 Roll of Honour by the United Nation’s Environment Programme in 1989; the Pew Marine Conservation Fellow in 2001; the Presidential Lingkod Bayan Award by the Philippine Civil Service Commission in 2000; and The Outstanding Filipino (TOFIL) Award in Science in 1992.  He was elected Academician by the National Academy of Science and Technology (NAST) Philippines in 1993.

Gomez continues to do research on marine life conservation and restoration. He is also into raising indigenous trees for urban greening.

Meanwhile, Trono is honored for his outstanding contributions in tropical marine phycology (algae) with focus on seaweed biodiversity, biology, ecology and culture.

He is credited for his extensive studies on the seaweed culture that eventually led to the boom of commercial seaweed farms in the coastal areas of Southern Philippines.

For his pioneering works on the culture of seaweeds as a productive livelihood for fisherfolks, Trono received awards and distinctions such as the Likas Yaman Award” from then Ministry of Natural Resources now Department of Environment and Natural Resources (1978), UP Alumni award in 1979, and Plaque of Recognition for his outstanding scientific contributions to the advancement of the science of phycology in the Philippines by the Asia Pacific Society of Applied Phycology in 2006. He was elected Academician by the NAST in 2008.

Trono finished his BS Botany from UPD in 1954 and his MS in Agricultural Botany from Araneta University in 1961. He later earned his PhD in Botany (Marine) from the University of Hawaii, USA in 1968 on an East West Center Study Grant.

The Order of National Scientist Award was created on December 16, 1976 through Presidential Decree No. 1003-A.  It is administered by the NAST-Philippines, the advisory body of the Philippine President on policies concerning science and technology in the country.  — Photo by Ryan Lim, Malacañang Photo Bureau