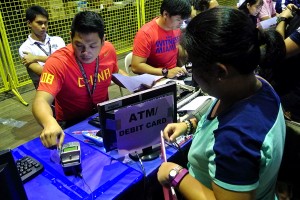 UPD students may now use thier ATM cards in paying thier tuition. A scene at the payment line at the UP Theater.

(AUG. 4)—UP Diliman students may now pay their tuition  using locally-issued debit and ATM cards from Aug. 4 to 8 at the University Theater.

The new payment scheme was made possible by a Memorandum of Agreement between the Office of the Chancellor and the Development Bank of the Philippines (DBP) on Apr. 22. As implemented by the UP Diliman Cash Office, tuition fees may now be paid using debit and ATM cards under Bancnet, Megalink and Expressnet interbank networks.

According to Leonila T. Balasbas, Acting Director of the UPD Cash Office, the administration aims for less hassle and security risks on the part of the payers. She also seeks to relieve the Cash Office of the worries of safekeeping large sums during registration period.

The endeavor is also intended to speed up the payment process and prevent long queues and waiting time.

Five ATM terminals will be available at the UP Theater for students who will opt for this scheme. Transactions will be processed from 7a.m. to 4p.m. only on said dates since the University Theater payment center closes on Aug. 8.

However, students who will pay after Aug. 8 will have to do so at the Cash Office, located in the PNB Building at the back of Shopping Center. It is open from 8a.m. to 5p.m. on weekdays. Aug. 15 is the last day for payment of tuition fees.

Balasbas also reminds students who will use debit and ATM cards to check their balance before proceeding to pay. Card users should also check for the validity of their debit and ATM cards. Credit cards, on the other hand, will not be accepted.

Aug. 4-8 is the pilot-testing period of the new scheme.