Trans-boundary, before it is set in stone

By Chi A. Ibay, image by Leonardo A. Reyes 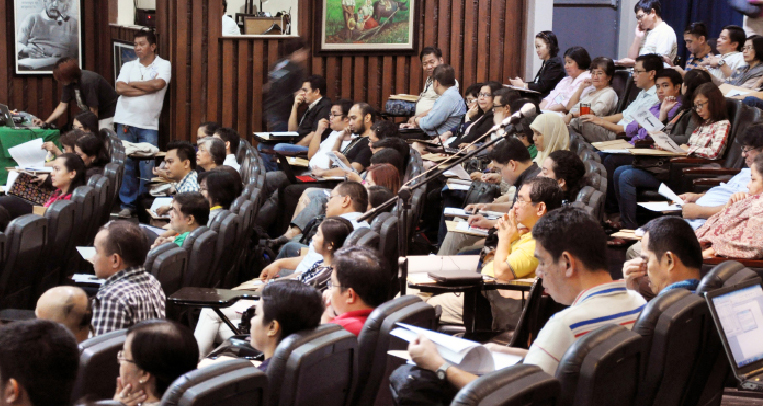 Participants ponder on the issues at hand at the NIP Auditorium.

(September-October)—It was to be a venue to craft a new General Education (GE) program fit for the first K-to-12 graduates, who will be UP Diliman’s (UPD) freshmen in Academic Year 2018-2019.

Instead, more issues were raised than resolved in the 2014 UPD General Education Conference held from Oct. 28-29 at the National Institute of Physics (NIP) Auditorium.

More than 150 faculty members, many from the various colleges at UPD, along with participants invited from the constituent universities of Manila, Los Baños, Baguio, Tacloban, Open University and Mindanao, put their heads together in the 2-day conference to identify, discuss and try to resolve concerns regarding the proposed new GE program.

The new GE. Why the need for a new GE program? This was the question foremost in the minds of many participants.

“Most of the impetus came from the K-to-12 development. At the same time, we know that the ASEAN integration is upon us,” said Dr. Alyssa P. Alampay, Assistant Vice President for Academic Affairs of the UP System (UPS).

According to the “Official Gazette,” the K-to-12 program of the Department of Education adds kindergarten and extends primary and secondary education to 12 years to “provide sufficient time for mastery of concept and skills, develop lifelong learners, and prepare graduates for tertiary education, middle-level skills development, employment and entrepreneurship.”

“We have to rethink the GE courses we are offering in the university. The framework is multidisciplinary, which comes from the realization that a lot of the GE courses are now being taught in K-to-12,” Alampay said at a plenary discussing the UPS’ proposed GE framework on the first day.

Two other plenary sessions put the issue in a bigger perspective: a discussion of the Commission on Higher Education (CHED) GE framework and a review of the UPD GE program objectives.

Proposed framework. Two GE frameworks were offered, one by CHED and the other by the UPS. Both frameworks have eight categories, with variations.

The CHED framework has 36 units, with 24 units of core courses, nine units of electives and three units on the life and works of Rizal. These core courses are: 1) Understanding the Self: Nature of Identity; 2) Readings in Philippine History; 3) The Contemporary World; 4) Mathematics in the Modern World; 5) Purposive Communication; 6) Art Appreciation; 7) Science, Technology and Society; and 8) Ethics.

The UPS framework also has 36 units, with 24 core and 12 elective units. These are: 1) Living Art and Culture; 2) Self and Society, 3) Mathematics, Culture and Society; 4) Ethics; 5) Living Systems; Understanding the Physical Universe; 7) Science, Technology and Society; and 8) The Life and Works of Rizal.

Dr. Benito M. Pacheco, Vice Chancellor for Academic Affairs, pointed out that in the CHED classification, each course category is a “core course” with an individual syllabus. On the other hand, in the UPS framework, “core courses are official, in writing, under the label ‘core categories’.”

Following the overview of the frameworks, a workshop ensued, where participants were supposed to draft the objectives and performance metrics of the future UPD GE program. The workshop also served as a venue to ventilate reactions and opinions on a number of concerns regarding the task at hand. The same ensued in the discussions during the second day of the conference.

Among the concerns discussed were: the GE and its impacts, the UPD framework and operationalization of the new program; “Tatak UP;” the use of Filipino and the university’s language policy; and internationalization, among others.

The GE and its impacts. Early into the conference, a number of participants aired concerns regarding the need to revise the current GE. Mirano summarized these as: “1) what is wrong with our present GE; 2) where is it weak, where is it strong; 3) how can we plan for the future unless we know where we are; 4) how can we know our kind of clientele if we have not assessed how our students are.”

Another issue was how to measure the GE’s impacts.

Dr. Roland Sarmago of the NIP commented that with the K-to-12, it would be difficult to “sell” the 5-year BS Physics program; to enable it to thrive, it must be reduced to four years. “The reason why the NIP is able to produce a steady stream of PhD graduates” is because of the thesis requirement of the program. He said the effect of GE is hard to gauge unlike the effect of the thesis for the program. “If I am going to make BS Physics four years, hindi ba perhaps it would be justified to say na wala na lang kaming masyadong GE?” he asked.

Dr. Josephine Dionisio of the Department of Sociology, however, stressed the need to look further into the impacts of the GE program.

She related results of a study conducted by the department that solicited narratives from graduates of different years, under different GE frameworks.

“One striking thing they said was: what they got from the GE is the framework, the life philosophy. There are certain skills and competencies that helped them in their career and personal life,” she said.

Meanwhile, Pacheco urged the participants to ”pursue the visioning of their programs” through an academic program review. He offered funding support and urged the faculty to do so before the UPS conference next year. “Pursue your visioning per program and see what kind of GE you would wish to have while there is still time, while it has not been cast in stone or ordered from above or whatever,” he said.

UPD framework and operationalization. Impassioned discussions also centered on the framework—its presence or lack of it, which proposal to use and how to operationalize it.

Dr. Robin Daniel Z. Rivera of the Department of Art Studies was among the strongest proponents of the need for an intellectual framework. Several other faculty members shared his sentiments.

Rivera presented the historical overview of the GE program objectives in a plenary session on the first day of the conference.

Prof. Jay A. Yacat of the College of Social Sciences and Philosophy (CSSP), however, believed otherwise. He said the issue was operationalization: if the courses are multidisciplinary, what kind? Will there be core and elective courses?

He presented a comparison of the CHED, UPS and UPD GE objectives in a plenary on the first day. He also presented a table tracing UPD’s GE program from 1962 to the present.

He said the GE program objectives were the same from 1962 to 2002, designed to “broaden the students’ intellectual and cultural horizons.” He said the emphasis was on critical thinking in the 1986 framework, which became integrative thinking with the Revised GE in 2002.

Dionisio, on the other hand, asked if the designers of the new program will explore areas other than the CHED and UPS frameworks or, if UPD will simply “shoot” its existing GE courses into either the CHED or UPS framework.

Related to operationalization, Dr. Milagros Laurel of CAL asked how the courses will be structured. She asked if incoming freshmen in the first semester can take all the courses, or courses will have certain expectations from students.

Still on the need for alternative frameworks, Dr. Jaime Naval of the CSSP said since the 1920s, UP GE programs have been designed following that of Harvard University. “We are following somebody’s shadow all the time,” he said. He suggested looking at the framework of members of the ASEAN University Network, or universities in China, or Japan.

Tatak UP. Discussions on “Tatak UP” centered on the characteristics of a student who finishes the UPD GE, and whether these qualities can be attributed solely to the GE.

According to Dean Rosario Alonzo of the College of Education (CEd), these characteristics are: “may malalim na pagkakakilala sa kaniyang sarili; may malay sa kaniyang kasaysayan; nakalubog sa kaniyang kultura; may panlipunang pananagutan at makabayang paninindigan at kapatirang pandaigdig.”

She said these characteristics were identified in a workshop on the first day. Other characteristics include: “leadership qualities, integrity, nationalism, imbued with idealism in serving the country and the global community, excellence in terms of academic standards and ethical professional service.”

Dr. Portia Padilla of the CEd opined that it is difficult to measure if Tatak UP is the product of the GE or the whole undergraduate program.

Internationalization and the GE committee. Dr. Danilo Victorino of CAL brought up the problems confronting visiting professors. “It is difficult for our foreign professors to secure the necessary papers. Did you know that one of the visiting professors in Spanish arrived in November (last year) and only got her work visa last week?” he said.

Addressing the concern, Pacheco announced that his office is currently setting up the Diliman Office of International Linkages. “This is our best effort to really put together all the distributed efforts and coordinate it, how to aid the mobility, both inbound and outbound, of researchers and students,” he said.

Another concern was the status of GE committee members, which Laurel brought up. She said the members are without appointments, without academic load credits, without honoraria, and are organized only when there is a conference. “If the committee had an official appointment, had a list of tasks, and their academic loads were reduced, they will be able to study everything that was mentioned here today,” she said.

GE Center. After two days of debate, the participants at least agreed on one thing: the need for the UPD GE Center.

Dr. Marian P. Roque of the Institute of Mathematics presented the proposal for the UPD GE Center. The center is envisioned to evaluate and endorse to the chancellor recommendations with regard to policy and programs, plan GE activities and represent UPD in the System-wide GE council.

Five organizational options were offered, all under the jurisdiction of the Vice Chancellor for Academic Affairs.

“It is very clear we need a GE center. What form it takes will have to be determined but the functions of the center very clearly relate to the things you are bringing forward, all the way for the need to research what other universities are doing, to monitoring, looking at our past experiences and learning from the pioneers of GE in the Philippines,” said UPD Chancellor Michael L. Tan, capping the conference.

In closing, Pacheco thanked the participants and expressed pride that Tatak UP was formulated in Filipino. “Flavor yun ng GE ng UPD,” he said.

He also introduced a new term: trans-boundary. “International, to me, I will banish from my vocabulary: I will embrace the term trans-boundary….It is more metaphorical applying not only to boundaries between nations, between disciplines, but also between real and virtual worlds and even between languages.”

He enjoined the participants to look at the 2-day exercise as “lunch”: to chew on it, digest, savor and think about it in the days to come and to come back for more of the same again, sometime.

The conference was organized by the 2014 UPD GE Committee, headed by Pacheco, with support from the Office of the Vice Chancellor for Academic Affairs.