The science of art

By Chi A. Ibay, image by Leonardo A. Reyes 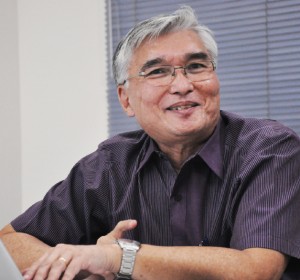 (July-August)—First, he studied the oceans. Then he captured the land, its fascinating contours and its myriad creatures.

Gil S. Jacinto is a professor at The Marine Science Institute (MSI). A c h e m i c a l oceanographer, he has a PhD in Marine Chemistry from the University of Liverpool, England. His colleagues, Maria Lourdes San Diego McGlone and Gisela P. Concepcion, describe his researches as “the chemical characterization of seawater to better understand the association of eutrophic waters with aquaculture and other pollution-related human activities.”

His accomplishments as a marine scientist are perhaps evenly matched by his passion for photography.

Unknown to many, he is a long-time photographer, his images quietly finding their way into the campus’ cultural scene, into the official publications of UP Diliman (UPD) and most recently, mainstream media.

Coalescence. In November 2008, he held an exhibition of selected photographs at the Vargas Museum at UPD. Entitled “Coalescence,” the show featured images taken during his work and travels: sunsets, sunrises, garden plants and insects, sea and landscapes and people. 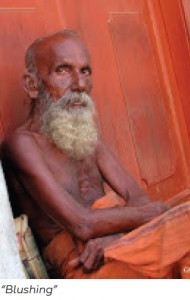 Two portraits immediately stand out, both of older people: an old man, his skin as taut and orange as his dhoti and the door he sits against, with the caption “Blushing.” Jacinto said he shot the image during his travel to India.

The other, captioned “Camouflage,” is an extreme close up of an elderly woman in sepia, the deep, etched lines on her face blending with the ridges on the bark of the Sampaloc tree she is propped against. It was shot during his travel to Camotes Island in Cebu.

The most striking element in both photographs are the subjects’ eyes: wide, unflinching in the camera’s intrusion, staring into the viewer’s soul. 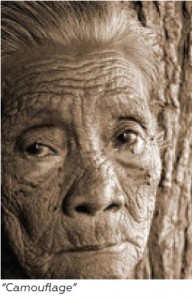 For such powerful images, however, the photographs have a peculiar stillness, some measure of quiet but complete control, as if the photographer had waited, patiently, to capture and freeze the zen of the moment. The same stillness and superb control permeates most of Jacinto’s work: vignettes of children at play, colorful sunrises and seascapes, all of which were taken in the course of his travel to research sites around the world.

“Logical thinking, reasoning, observation, patience, passion and objectivity required in the natural sciences usually coalesce with the way I take photographs,” he said.

Jacinto exudes the same calm, his voice modulated, unhurried. “At that time, I used the term “Coalescence.” I like that term—the disappearance of the boundary between two particles; to grow together, to unite into a whole, or arise from the combination of distinct elements,” he said.

He was referring to the merging of science and art, of the left and right sides of the brain: “the left for logical thinking and the right for the artistic side.”

He uses a quotation from Henri Cartier Bresson, the French photographer considered the father of photojournalism, to express his outlook on photography: “To take photographs means to recognize simultaneously and within a fraction of a second—both the fact itself and the rigorous organization of visually perceived forms that give it meaning. It is putting one’s head, one’s eyes and one’s heart on the same axis.”

His father gifted him with a Brownie when he was much younger. In the 1970s, he got his first camera, an Olympus SLR, when he was in Japan. He admits to reading lots of books on photography, even taking up an advanced course from the Philippine Photographers’ Federation in the early 2000s. On the whole, he has been into serious photography for only about 10 years.

“I like portraiture but of the candid kind, when people are not conscious or if they know you are trying to take a photograph, wala silang pakialam. Then I guess landscapes. It varies: to me it is also the challenge—you just walk and start imagining: how would this image look like if I took a photograph? It could be a leaf, a van, a tree, people. That is the luxury of framing in my mind the images I take.”

GoPro and Benham Rise. In June, the news site Rappler. com published photographs taken of the marine expedition to Benham Rise and credited them to Jacinto.

The photos, striking in the backdrop of the deep blue ocean and the clear sky, showed the researchers exploring the underwater territory, divers in rubber boats, water sampling procedures, the divers and researchers themselves, of which Jacinto was a member.

Conducted in May 2014, the expediton was a 2-week joint exploratory and oceanographic cruise involving staff and students of UPD, UP Los Baños, UP Baguio, UP Mindanao, Ateneo de Cagayan, Ateneo de Manila University and the Bureau of Fisheries and Aquatic Resources (BFAR) on board BFAR’s research vessel. The area explored was Benham Rise, located off the coast of Aurora Province. The United Nations confirmed the 13-million hectare underwater plateau as part of the country’s extended continental shelf and territory in April 2012.

“The Benham Rise photos are not all mine. The aerial photos were taken using a GoPro on a kite. GoPros are good because they are very light, have a wide angle and high resolution and are waterproof. We submerged four GoPros at Benham Rise to get the underwater photos before the divers got in because we did not know what to expect.”

Marine expeditions such as this and the opportunity to capture unique images give Jacinto a distinct advantage.

“Fortunately, my work enables me to take photos while at sea and of places and people visited en route to the study sites,” he said.

A true coalescence of work

Aerial shots of the campus. In the last two years, Jacinto set his sights higher, literally. Aerial photos of the UPD campus, taken aboard a helicopter, began to appear on institutional publications.

The maiden issue (August 2014) of UPdate Magazine has on its cover an aerial shot of the University Avenue ending in Quezon Hall. The shot was taken in 2012. 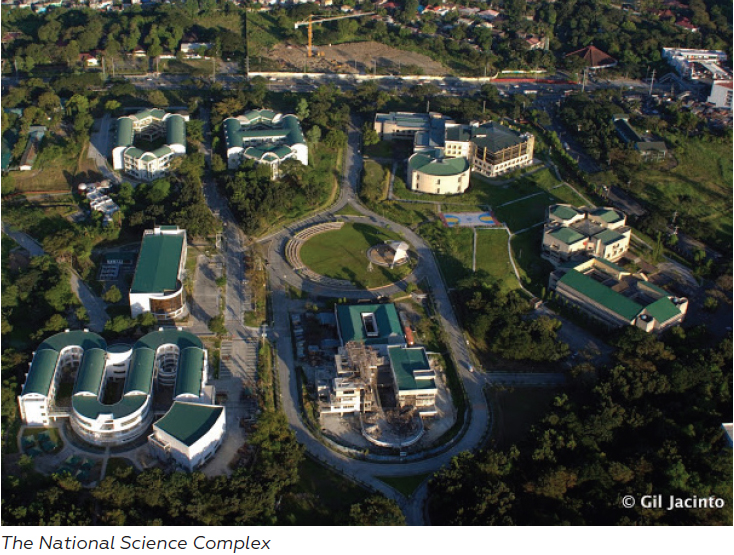 According to Jacinto, in 2012, Dr. Caesar A. Saloma, who was then UPD Chancellor, requested Dr. Carlos Arcilla, a professor at the National Institute of Geological Sciences, to take aerial photographs of the campus for documentation purposes. Arcilla then asked if he would like to join the shoot. On board a helicopter, he and Arcilla criss-crossed the campus to take what is perhaps the most updated aerial documentation of the university’s estate.

A number of Jacinto’s photographs have also been featured in Saloma’s 2012 Convocation, and the Chancellor’s Report (March 2011-February 2014).

The photographs give the viewers a bird’s eye view of the campus, revealing the intricacies and boldness in the design of new infrastructure on campus, which had been in the process of completion for the last five years. Among these are buildings for the various institutes of the National Science Complex, the Engineering Complex, the Centennial Dormitories along E. Jacinto Street and the UP Arboretum.

Private consumption. For one who takes his photography seriously, Jacinto does not have a photo blog or an Instagram account. “I tend not to be a very public person. I use Picasa for photo sharing. I don’t use Flickr which is used by more serious photographs. I don’t blog because that takes time,” he said.

He, however, is thinking about holding another exhibition in the future. “I am thinking it does not have to be a solo exhibit, I could bring in others. It could be thematic. I am thinking it could be aerial photos as a theme, images of UP property or things like that,” he said. When asked why he does not have a single photo of a fish, he said “I don’t do underwater photography. Quite a number of our people here take underwater photos and they are very good at it. Most of my subjects are above water, on water or next to but not in the water.”— Additional photos courtesy of Gil Jacinto