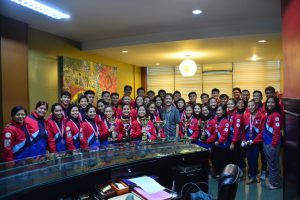 (DEC. 6)—The University of the Philippines Varsity Pep Squad (UP Pep) teamed up with the UP Filipiniana Dance Group to represent the Philippines at the Asian Cheerleading and Dancesport Championships (ACDC) held in Jakarta, Indonesia from Nov. 26 to 27 and bagged six medals.

The squad, also known as Team UP-Philippines, earned a gold medal (Mixed Group Stunts category), three silver (cheerdance, all-female team cheer and cheerdance doubles) and two bronze medals (mixed team cheer and all-female group stunts), according to Dr.  Eloisa May P. Hernandez, UP College of Arts and Letters Department of Arts Studies professor and UP Pep’s faculty adviser, in an interview with “Tinig ng Plaridel,” the official student publication of the UP College of Mass Communication.

Team captain Jari E. Buenaventura, Ma. Karolina C. Sison and Joseph Francis H. Guevara said in an interview with UPDate, the UP team was invited in the 2nd ACDC by the Gymnastic Association of the Philippines-Cheerleading Philippines Federation which also serves as a qualifier for the 9th Cheerleading World Championships.

The 8-time University Athletic Association of the Philippines (UAAP) cheerdance champions may have skipped this season’s competition but, nonetheless, brought home “bacon,” and presented their trophies and medals to Chancellor Michael L. Tan in a courtesy call on December 1 at the Office of the Chancellor.

UP Pep’s head coach Prof. Lalaine Pereña expressed her gratitude for the Chancellor’s support and said the team is set to prepare for the 9th Cheerleading World Championships to be held at Takasaki City, Japan in November 2017.

“Officially, we are already part of the three categories and hoping the other four categories ay makuha rin namin with our performance ngayon,” Pereña added.