Solving problems in an organized manner 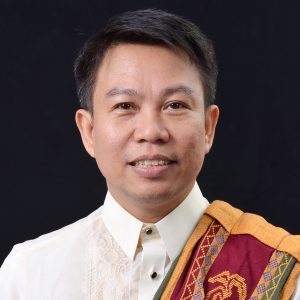 (FEB. 24)—Prof. Ernie Lope, PhD, former community affairs vice chancellor, was recently honored by the National Research Council of the Philippines (NRCP) as one of the seven 2020 NRCP Achievement Awards. He is cited for his significant works in the field of Mathematical Sciences.

A full professor at the UP Institute of Mathematics, Lope specializes in differential equations and applied and computational mathematics. He has published his numerous researches in reputable international peer-reviewed journals.

His latest research “Application of particle warm optimization in optimal placement of tsunami sensors” was featured in PeerJ Computer Science in 2020. The paper is about developing an efficient early warning system that will trigger an effective community response. It also studied the best placement of sensors so that tsunamis are detected in the least possible time.

“We first study a test problem with hypothetical subduction zone locations and varying water depths. We then apply the proposed method to determine the placement of sensors for early tsunami detection in the Cotabato Trench,” he said.

Lope has also presented his research works in conference proceedings and in international meetings.

For his distinguished and noteworthy researches, Lope received prestigious awards such as the 2015 UPD Gawad Tsanselor para sa Natatanging Guro; the 2012 National Academy of Science and Technology (NAST) – Third World of Sciences Prize for Young Scientists (Mathematics); and the 2006 NAST Outstanding Young Scientist in the field of Mathematics.