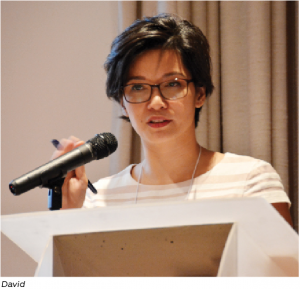 The shift towards social media (SocMed) as the main platform for discussion and information has led to a redefinition of news.  This was the premise of the lecture “Social Media as Site of News and Political Discourse” by Prof. Clarissa C. David, PhD, at the Pi Gamma Mu Inaugural National Conference on Oct. 13 at the NISMED auditorium.

The public can no longer tell fact-based from opinion-based stories because the lines have been blurred, David said.

Speaking before a gathering of academics and guests, she talked about Facebook in particular, describing it as “looming large, is global and increasing in size in terms of Filipino audience.”  As testament to this, almost all Filipinos with internet access are on Facebook.

The news feeds on Facebook, David said, add a “halo” of believability to all content regardless if it was real or fake because these were shared by friends.  Facebook feeds “opinion reinforcing” which eventually makes the user only see contents that agree with his or her opinion.

This pre-selection of feeds harms the democratic process of deliberation and discourse because people now do not work on the same information.  It also strengthens biases on any side and in turn polarizes entire societies.

Engine of incivility.  Social media, being ubiquitous and inseparable from the rest of the social issues and concern in life, hosts opportunities for polarizing discourse, information and incivility.

Online anonymity in social media directly contributes to high levels of incivility among its users.

This behavior drives away online users who are not willing to engage and be exposed, while attracting users who gravitate toward this kind of talk.  Because of this, the online public is emboldened and desensitized to escalating forms of incivility.

“Exposure to incivility in online discourse has led to higher distrust in government, a higher distrust in news, negative or distressed emotions on leaders and weakened the interest of talk to the unlike minded,” David said.  “Ang natututunan natin ay galit kaagad.  Others call it the industry of outrage so napa-prime na ang mga tao na this is what we do in Facebook.  We get angry.”

The Filipinos’ social media presence, coupled with the country’s history of low newspaper readership and a young and struggling industry of news and practice of news work have contributed in bringing down the trust in the enterprise of journalism.

David revealed that readers of news or any feeds on smart phones have lower attention spans, lower engagement with the content, have lower level of learning and higher levels of more negative emotional responses, “because you’re not learning so much, you’re not thinking that much.”

David warned that social media’s erosion of trust in traditional media needs to be fixed because people need an institution to turn to for real information.

Fake News. Real dangers are not from fake news.  David said the term “fake news” is dangerous because there is a desire for State recognition and regulation which can curtail information and freedom of speech and expression.

This came in light of the recent Senate probes on information on media.

“Fake news is really manufacturing information if you look at the broad landscape at what everybody refers to as fake news.  It’s not really that huge of an issue in relation to all of the other categories here namely the hyper artisan blog that are really just there to take the real news and turn it into propaganda,” David said.

David said some of those tagged as fake news are really blogs or opinion articles on the news site.  Nowadays, sharing of misinformation is easy because there is no consequence.  These news are shared and commented on much quicker than real news.

David said people should not succumb to the temptation of State regulation of speech because it may lead to a trap of accepting regulations in areas where one is not supposed to accept it.

“Social media will continue to change.  For better or worse, it is here to stay.  Users should assert their power in shaping the social media ecosystem,” she said.

David is with the CMC’s Graduate Studies Department and is one of the National Academy of Science and Technology’s (NAST) 2015 Outstanding Young Scientists. She is a UP E. Angara Fellow for Policy Research.  Her book “The RH Wars: Framing the Population and Health Debate” received the NAST Outstanding Book Publication.

She was among the social scientists who delivered a lecture before a gathering of academics and guests at the Honor Society’s first national conference with the theme “Framing the Nation’s Narrative Through the Lenses of the Social Sciences.”