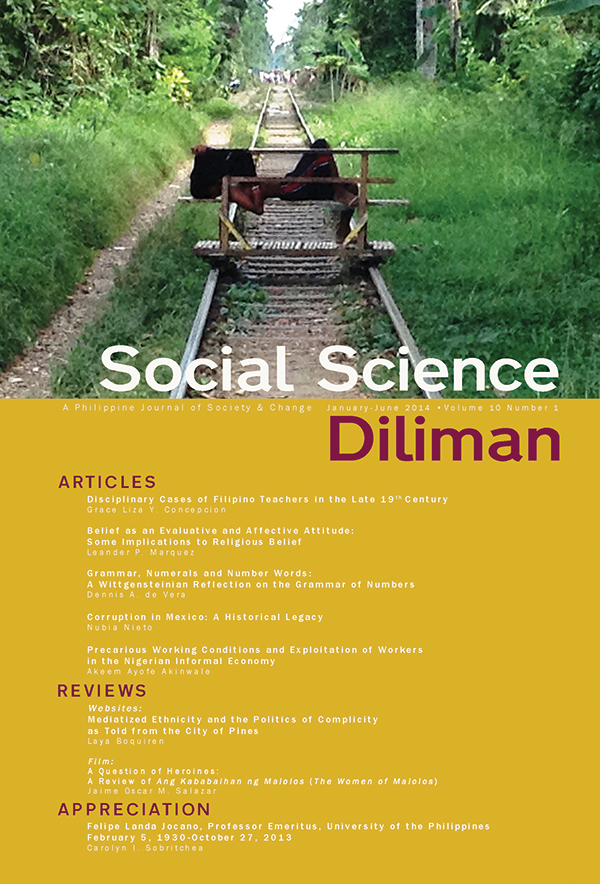 Eight entries can be found in the January-June 2014 issue comprising five articles, two reviews and an appreciation piece by Carolyn I. Sobritchea on Professor Emeritus F. Landa Jocano.  The current issue is edited by Eulalio R. Guieb III.

The five articles are “Disciplinary Cases of Filipino Teachers in the Late 19th Century,” by Grace Liza Y. Concepcion, “Belief as an Evaluative and Affective Attitude: Some Implications to Religious Belief” by Leander Marquez, “Grammar, Numerals, and Number Words: A Wittgensteinian Reflection on the Grammar of Numbers by Dennis A. de Vera, “Corruption in Mexico: A Historical Legacy” by Nubia Nieto and “Precarious Working Conditions and Exploitation of Workers in the Nigerian Informal Economy” by Akeem Ayofe Akinwale.
Laya Boquiren reviews websites about Baguio City in her topic “Mediatized Ethnicity and the Politics of Complicity as Told from the City of Pines,” while Jaime Oscar M. Salazar reviews a film in his entry “A Question of Heroines: A Review of ‘Ang Kababaihan ng Malolos’ (The Women of Malolos).”

The journal’s cover features the railroad scooter ‘padyak riles’ and its driver, to which Narita E.C. de las Alas’s piece, “Siesta on the Riles” is all about.  De las Alas describes the scooter or ‘padyak’ as powered by the arms and legs of its driver.  “The driver has to give the scooter a hard push followed by a ‘padyak’ (stomping of the foot) so that it will be able to glide along the tracks,” De las Alas writes.  The “siesta” part of the photo turns out to be the driver taking his break, a power nap of sorts, and the “riles” the part where he parked, as “he took advantage of the shaded area along the tracks to park his ‘padyak’, take his ‘siesta,’ and recharge for his next trip.”

Meanwhile, editor Guieb wrote that with the natural and human tragedies in the Philippines in 2013, “it is unconscionable for ‘Social Science Diliman’ to remain silent about last year’s tragedies, the ravaging consequences of which continue to profoundly haunt the present.  We, thus, hope that this editorial serves as a call for the submission of articles that critically examine the political ecology of environmental disaster.”

“Social Science Diliman” is an internationally refereed, bilingual (English and Filipino), semi-annual journal for the social sciences of the UPD Office of the Vice Chancellor for Research and Development (OVCRD).  It was accredited by the Commission on Higher Education (CHED) as Category A-2 journal on January 28 this year, the highest accreditation CHED confers to journals not yet listed in Scopus or Thomson Reuters.— Image courtesy of OVCRD