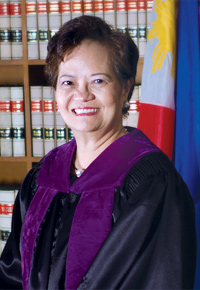 (JUN. 9)—Supreme Court of the Philippines (SC) Associate Justice Teresita J. Leonardo-de Castro was elected president of the International Association of Women Judges (IAWJ) on May 5.  She was sworn into office on May 9 in an IAWJ event in Arusha, Tanzania, succeeding Justice Eusebia Nicholas Munuo of the Court of Appeals of Tanzania.

De Castro will serve as IAWJ president until May 2016.

Based in Washington, D.C., IAWJ is a non-profit, non-governmental organization with members representing all levels of the judiciary worldwide and sharing a commitment to equal justice and the rule of law.  It has approximately 4,000 members in almost 100 countries worldwide. The IAWJ works to pioneer judicial education programs to advance human rights, uproot gender bias from judicial systems and promote women’s access to courts.

De Castro garnered the top vote among the nominees in an election by the 10-member Board of Directors and 7-member Executive Council that represented all the members of IAWJ.

In a phone interview with UPDate Online, De Castro said she plans on taking the lead in continuing the strategic plan adopted by the IAWJ Executive Council and Board of Directors in defining the mission or core values of the organization.  According to its website, IAWJ essentially works with its national association in its five regions (Africa, Asia-Pacific, Europe and Middle East, Latin America and North America) to develop and implement training and educational curricula on issues concerning discrimination and violence against women.  IAWJ currently has four flagship programs: judicial leadership; judicial education; addressing sextortion; and human trafficking.

In addition, De Castro will supervise and manage its headquarters in Washington D.C.  She said since IAWJ is a private organization, her presidency does not conflict with her position as SC justice.  She further said she conducts her daily duties with IAWJ via email.

Prior to her post, De Castro has held key positions in the IAWJ’s including as member of the Board of Directors (2008) and President-elect (2012-2014).