UP Diliman’s (UPD) celebration of the National Arts Month kicked off on Feb. 1 with the unveiling of Sansinukob, an installation art exhibit, at the UP Lagoon, UP Amphitheater and College of Mass Communication (CMC) Hill.

It was a glimpse of the ethno-astrology and ancient cosmology of Philippine cultures.

According to professors Sir Anril P. Tiatco and Jem R. Javier, Sansinukob exhibit’s project leaders, each layer of the universe has a story on the origins of men and the world, filled with characters (in)directly connected with the culture and destiny of all beings.  These were covered in various k’wentong bayan (folk literature) which reflect the culture and appreciation of the community.

Tiatco and Javier said Sansinukob allows people to explore the corners of the universe in accordance with the k’wentong bayan collected from various indigenous groups in the Philippines. They will be able to realize the richness and significance of the indigenous epistemology and system of beliefs of the Filipinos— the surrounding existence of man and the visible and invisible elements of Sansinukob which will lead to solving the Great Connection that will remain and continue. 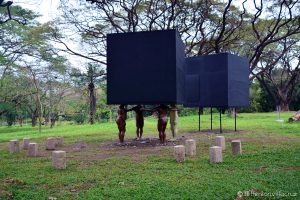 Emptiness. Located at the Lagoon across the Faculty Center, this installation takes on the paradox of presenting the concept of “Emptiness” through a large-scale structural fabrication, an experience of the intangible, the void of space, the narrative of nothingness— all through a material form in a site specific space.

From Junyee’s original concept, the sculpture is a large-scale 8 meter by 4 meter rectangular wooden box in extreme black coat and finish wherein the viewer, upon entry to the structure, is overwhelmed by the experience of emptiness and void of the space. Four fiberglass figures as structural posts “carry” the huge room-size box to a height of 5-feet. The 5-feet elevation allows for the average height local audience to partially slip their heads through a series of 15-inch openings located underneath the structure.

The box is wrapped and tied (inspired from installation artist Christo) to create a texture—filled and seductive structure, its representation of the iconic balikbayan box. The structure is an invitation to the audience to attempt to partake of that experience of abundance, anticipated excitement and of connecting—only to be confronted by the extreme opposite of the expected.

Emptiness was created by Junyee and Leonardo.

Junyee is known as the pioneer of found space art in the Philippines. A UP College of Fine Arts (CFA) graduate, he was awarded the Diwa ng Sining at Kalinangan by the National Commission for Culture and the Arts in 1980.

Leonardo, a recipient of the Cultural Center of the Philippines (CCP) Artists Award in 2000, is a Special Education for the Visual Arts professor at the Philippine High School for the Arts where he graduated in 1982. He received the Monbusho Scholarship Grant in 1992 and was a Japan Ceramic Aesthetics researcher. 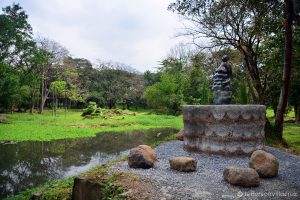 Mebuyan sa Idalmunon. This work mounted at the Lagoon near the Beta Epsilon Theatrum was inspired by the mythology of the Bagobo about Mebuyan and the universe called Idalmunon. This universe can be found at the edge of Itim na Ilog where the souls of the dead go on a journey by boat.

Mebuyan is known as the mother of the underworld.  She has plenty of breasts that nurse dead infants. The infants will stay with her until they grow up and return to Gimokudan to live there peacefully with their dead families.

Mebuyan was created by Gudiño, assistant professor at CFA. She established the CFA Ceramic Studio in 2008 and currently serves as its faculty coordinator and program director. She was the first Master of Fine Arts student who received an academic distinction for her research and creation “LUAL: Kiln Firing as Art and Metaphor of Birthing.” 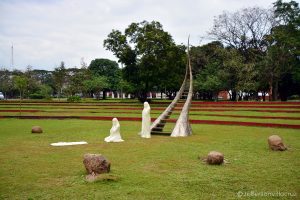 Ang Pagbabalik Lupa. This creation represents Lupa-on, based on the story “The Departure of Gods” of the Kalinga. It shows the separation of gods and people through setting a scenario of a woman hesitating while descending the stairway.

Mounted at the University Amphitheater, the stairway has a height of 18 feet and width of 5 feet. The stairway’s front is made of fiberglass which depicts a woman covered by a cloth from head to toe as a symbol for an act of shamelessness.  The woman falls down on the soil, almost lying and will appear again until she returns to the ground where she stands.

The work is a creation of Anton del Castillo who is known for works that show the reflection of the modern and contemporary way of life. He is an assistant professor at the UP Integrated School and was awarded the Artist II title by the UP System. 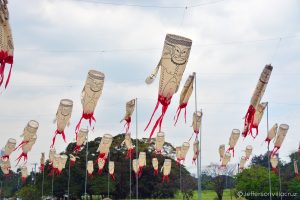 Ang Kahanginan. The concept of creation in this installation was adapted from the idea of flying as a way of narrating the mythology of the Bagobo about Lumabat’s journey to heaven.

Located at the CMC Hill, the work is made of the windsock and koinobori. The windsock is a flexible cylinder made from cloth and usually seen from the airstrip to show the direction and strength of the wind.  Each windsock of Kahanginan represents a male and female torso.

Abaya created Ang Kahanginan. He is a multi-disciplinary artist and a CFA professor.  He earned his Master in Fine Arts at the Winchester School of Art, University of Southampton, United Kingdom. He received the Artist II title from UP in 2013. 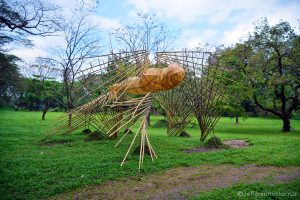 Agtayabon. The Agtayabon is a bird with a human body in the Bukidnon mythology. Once upon a time, there were only three creatures in the world and the bird acted as mediator between the two fighting gods, his companions. He uses his huge wings to calm down the two gods.

Agtayabon was created by New, a famous designer and 2012 CCP 13 Artists awardee who graduated from the CFA.  He received numerous awards for his creations including the Grand Prize for Sculpture in the 2005 Metrobank Art Awards; 2009 Ateneo Art Awards where he was awarded a La Trobe Residency Grant in Australia and the Artesan Gallery Residency Grant in Singapore and 2014 Metrobank Foundation Award. 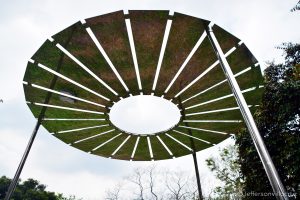 Langit-non. Adapted from the story “The Abode of the Creator of the Universe” from the Panay-Visayan myth, Langit-non is a raised structure with installation of mirror finish or highly reflective surfaces in circular formation.

From below, one could see the reflection of the surroundings the way Tungkung Langit, a hardworking god who fell in love with Alunsina, the virgin goddess of the eastern skies, would see the world from above.

The installation was created by Yuson, a multi-awarded sculptor who values place and space as a primary material for his obra. He was part of the Society of the Philippine Sculptors from 1993 to 2000 to revive the local community of sculptors. Yuson was acknowledged as one of the CCP 13 Artists in 2003.

Sansinukob exhibit is on display from Feb. 1 to Mar. 15.