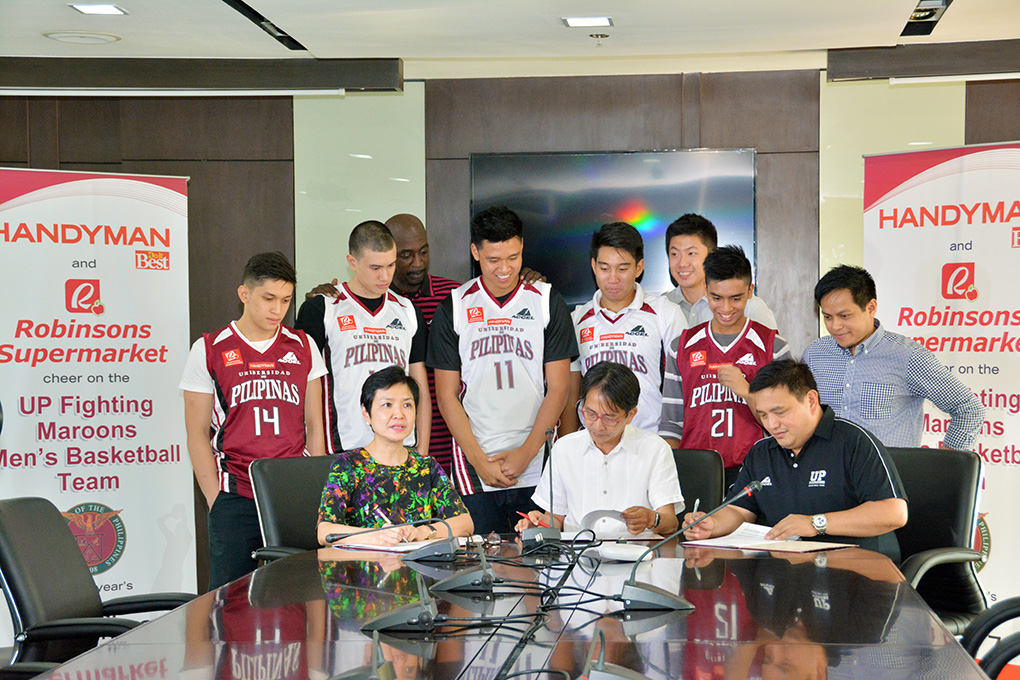 Officers of the RRH led by president and chief operating officer Robina Gokongwei formalized their support to the team in a meeting with UP Diliman Chancellor Michael L. Tan and Fighting Maroons manager Dan Palami on July 2 at the Board Room, Quezon Hall.

The RRH group has been backing the UP MBT since 2010, with only last year as a break.

Gokongwei said she chose UP MBT as a beneficiary because when she was enrolled at UPD as a BS Economics major, “I was a “bangko” (bench warmer) varsity swimmer. Jody Gadia [and] Wilfred Co [also] went to school here. We love this school and we just want to give back,” she said. Gokongwei attended UPD for three years until 1981.

Gokongwei also expressed high hopes for the Fighting Maroons, in light of UP hosting the University Athletic Association of the Philippines (UAAP) Season 78. “I’m sure we’re gonna have a great team,” she conveyed.

Palami explained that it is a “closer partnership” this time, with RRH involved not only in the financial upkeep of the team, but also in its management.

Woody Co, UAAP Season 69 Rookie of the Year for Basketball and former UP MBT player, will be RRH’s representative to the managerial team of the Fighting Maroons cagers. With Co as liaison, Palami assured the sponsors of transparency, real-time updates, and exchange of feedback.

“The University of the Philippines is really grateful to Robinsons for extending this initial donation for the basketball team. [I hope that] this donation inspires the other alumni and other potential supporters to come in,” Tan said.

Tan also acknowledged the participation of nowheretogobutUP, a Facebook open-group composed mainly of UP alumni, for constantly providing the varsity of the needed financial, logistical, and moral support.

“We’re preparing for the next bonfires [because] we will have one for every victory,” Tan said.