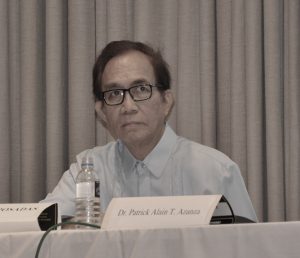 Paying their last respects were former colleagues in the academe, friends and former students. Among those who spoke were UP President Danilo L. Concepcion, former UP presidents Emerlinda R. Roman and Francisco Nemenzo Jr., former Commission on Higher Education (CHED) chair and UPD professor and now University of the East President Dr. Ester A. Garcia, UP Professor Emeritus Randolf David, Ben Belo, a colleague in the then Physics Department of the UPD College of Arts and Sciences (CAS), and Emet Untalan of the National Democratic Front of the Philippines’ Reciprocal Working Committee on Socio-Economic Reforms (NDFP RWC-SER).

Posadas, a physics professor, served as UPD chancellor from 1993-1996, where he was credited for establishing the Center for Environmental Research, Education and Services; the Archaeological Studies Program; the Materials Science and Engineering Center; and UP DIliman Information Office. 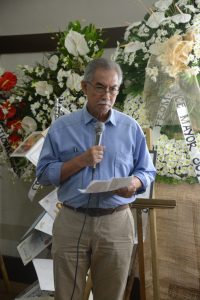 His lighter side. Roman fondly recalled that during her first term as UPD chancellor in the early 1990s, she and a closely-knit group of deans would get together after office hours, usually on Fridays, for things other than serious discussions and debates. Roman said there would always be karaoke singing. “Believe it or not, Roger was as serious about singing as he was serious about UP.”

Belo supported this unlikely trait of Posadas. He said that in the late 1960s, when he was still teaching at the then Physics Department of CAS, their group would play, especially during Fridays, Philippine games at the alley between Pavilions 2 and 3 of Palma Hall. Posadas, according to Belo, was the initiator of their regular recreation.

A visionary. Roman also talked about Posadas’s serious side, describing the late chancellor as a person of remarkable vision and imagination.

“Under his leadership, and with the support of his science colleagues, they transformed the College of Science (CS) into an institution worthy of recognition and respect, not only in our country but beyond our shores. And in UP, the CS now stands as one of the most respected units in the entire University. The large part of the credit should go to Roger,” Roman said. 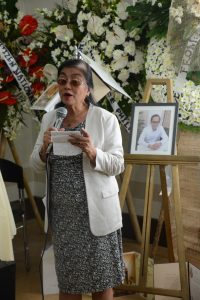 Garcia likewise affirmed Posadas’s role in the creation of the CS. Garcia narrated how she, Posadas and George Salas would drive around the campus to identify and map out the proposed location of the present CS Complex. They also wrote a paper (road map) about the need to establish the CS and what it would do in terms of advancing science in the country. “It is just fitting that he was chosen as the first dean of CS.”

David, in his eulogy, said Posadas believed in the special role of science as an engine of national development. In the early 1980s, Posadas was one of the first academics who expressed the need to split the old unitary CAS into three independent colleges. The late chancellor felt that the existing organization in the University, which was designed for an integrated liberal education, was hampering the growth of the natural sciences. The split, David said, was very costly for the University’s General Education program. “But on the other hand today, one can easily appreciate what that divorce meant for the natural sciences.”

To honor Posadas for being the prime mover of the University’s impressive Science Complex, David said, “If I had the power, I would lay a simple stone in his name in one remote corner of that magnificent Complex in recognition of the power of his vision.” The proposal elicited loud applause from the audience.

A staunch nationalist. Concepcion candidly admitted he barely knew Posadas, but he learned from people who personally knew him that the former Chancellor was a brilliant professor and a nationalist.

Meanwhile, Garcia recalled she met Posadas in the early 1970s, when he recruited her to join the organization Samahan ng Makabayang Siyentipiko. Together, they wrote papers on the oil crisis and the state of science in the country then. The Marcos government viewed the papers as criticism and they were branded as anti-Marcos. When Martial Law was declared, Posadas went underground, and in 1975, Garcia and Posadas were caught by the military.

They were released sometime in 1976 and were recruited by Nemenzo, who was then dean of UPD CAS, to teach in the College again. There, they actively pursued the advancement of science in the country. With Fr. Ben Nebres of Ateneo de Manila University, Salvador Gonzales from De La Salle University and William Padolina from UP Los Baños, they formed the Kapisanan ng mga Siyentipikong Pilipino (KSP).

Garcia said the KSP made plans for science in the country, which included the PhD consortium program, the establishment of the UPD College of Science and the creation of a council for natural science and mathematics that eventually became the Philippine Council for Advanced Science and Technology Research and Development (PCASTRD). Posadas was at the helm of these projects.

“We believed that the consortium succeeded because none of us, the leaders of the group, pushed for our expertise. We looked and considered what were the country’s needs at that time, which was more on applied sciences. The consortium produced many great academicians and scientists,” Garcia explained.

The NDFP through its RWC-SER also paid tribute to Posadas.

Julieta de Lima-Sison, chairperson of NDFP RWC-SER, said in her message which Untalan read, “Dr. Posadas is a nationalist who used his considerable talent not just for his personal or professional gains, but more importantly for the welfare of his people. He is a scientist of the people.”

The graft case. Nemenzo’s message centered on the graft case filed against Posadas. “This is in order to dispel any doubts about Roger’s integrity.”

Upon assuming the UP presidency, Nemenzo had the case reviewed. He believed that the punishment was too harsh for committing a minor breach of administrative procedure.

Nemenzo said in the very first meeting of the UP Board of Regents he attended, he informed the Regents that he was withdrawing the case against Posadas and was asking the new UP Legal Counsel to withdraw the case from the Sandiganbayan.

“Actually, I meant to reduce the penalty from dismissal from service to reprimand. Roger was not just an administrator, he was a visionary and an institutional builder. He is not a bureaucrat who is content to follow the traditional path. Roger was a great asset to the University. I would have surely made him part of my administration if not for the case that was filed against him. ”

David also discussed the graft case against Posadas. He said, because of Posadas’s passion to advance the cause of science and technology, he was often blunt, even insensitive and possibly arrogant in his professional dealings with others, that he clearly rubbed some powerful people the wrong way.

“At the height of his professional career, these traits got him in trouble in a life-changing way. The case had to do with his appointment as Project Coordinator of a Canadian-funded project to conceptualize the establishment of the Technology Management Center in UPD,” David said.

The biggest irony is that the Center, which is now fully operational and has produced many graduates, was established using the curriculum designed by a man who almost went to prison for it.

David said he was extremely elated by the Supreme Court’s decision in 2013 that vindicated Posadas. However, he wondered if the high court’s decision came a little too late, because Posadas already lost his job, his career and practically everything else that he had because of the graft case he had to fight for many years.

In giving honor to a man who never gave up his quest for justice, David said ”The highest tribute we could pay to Roger is to make sure that this form of malicious injustice will not have a place in the University of the Philippines. Never again.”
Posadas passed away on Aug. 20 and was cremated on Aug. 26.