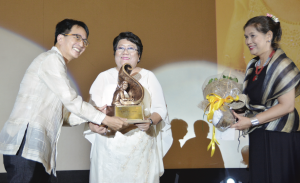 The UP College of Mass Communication (CMC) honored Custodio as the 12th recipient of the Gawad Plaridel Award for her outstanding contribution to the Philippine radio and longevity in the broadcast industry, a highlight of which was “bravely being on duty the day Typhoon Yolanda hit” the country in 2013 and her continuous efforts to help rebuild DYVL.

The Gawad Plaridel, named after the Philippine hero Marcelo H. del Pilar’s nom de plume, Plaridel, is the CMC’s distinction for Filipino media practitioners who have excelled in any of the media (print, radio, film and television) and have performed with the highest level of professional integrity in the interest of public service.

CMC commended Custodio “For her recognition of the power of radio to revive an almost-forgotten oral literary form, the siday, which functioned as the radio vehicle that carried the voices of the ordinary citizens to freely express their sentiments about timely national and regional issues, from themselves to others, from their homes to the government, from their communities to other communities, and from their community to the nation.”

CMC also cited Custodio “For using the Waray language in her programs on radio to deepen the discussions on various social issues: political, economic and cultural; and sectoral concerns.” Custodio was also recognized “For her use of radio as a valuable tool in rendering public service, in a manner that preserves the dignity of those in need.”

Fondly called by her colleagues as Ate Babes, Custodio has been working in the radio industry for five decades, starting in 1964 when she was hired by DYVL as a clerk. She earned her BS Commerce degree in 1969 at the Divine Word University while working as a clerk at DYVL’s accounting and traffic departments.

Custodio’s first stint as a radio broadcaster started when Charlie Filamor, DYVL’s former station manager, asked her to record her voice while reading a radio advertisement. In 1980, she was given her own program and served as emcee of the singing competition “Search for Superwheel Singing Star.”

She rose from the ranks and worked her way up to become DYVL’s station manager.

Custodio talked about DYVL’s Siday program and recounted her unforgettable experience when Typhoon Yolanda (international name: “Haiyan) devastated Tacloban in November 2013 while on duty as a station manager.

“Nov. 8, 2013—typhoon Haiyan hit Tacloban and smashed the DYVL building which was only a spitting distance from city hall along Kankabatok Bay. We could not save anything. Haiyan was a life-changing event in the lives of Taclobanons and the entire Region 8. It wrote finish to the more than 29 years old Siday program which we have not yet revived even if we already resumed operations at our new address in Brgy. Campetic, Palo, Leyte,” she said.

The DYVL Siday program “followed the DYVL breakfast news which has a fairly big share of listeners in the region. The Siday entries have been criticized by some readers/listeners especially from the academe for not observing high standards in poem writing. Whatever the academics have to say about these poems, then and now, we at the station could aver that our listeners waited for it every morning along with their morning coffee and seemed to enjoy it,” Custodio said.

The popularity of Siday encouraged the radio station to publish the entries into a book, with Custodio, Merlie Alunan and some of their friends from Tacloban as editors.

Custodio discussed the role of media in society, “Without the mass media—broadcast, print and other outlets (including social media), how would the people know about the doings of public servants? Without the press, how can a rational and intelligent public opinion, a critical factor in a democratic society, be formed? Without a militant media, how can be a meaningful discussion of issues affecting the workings of government be possible?”