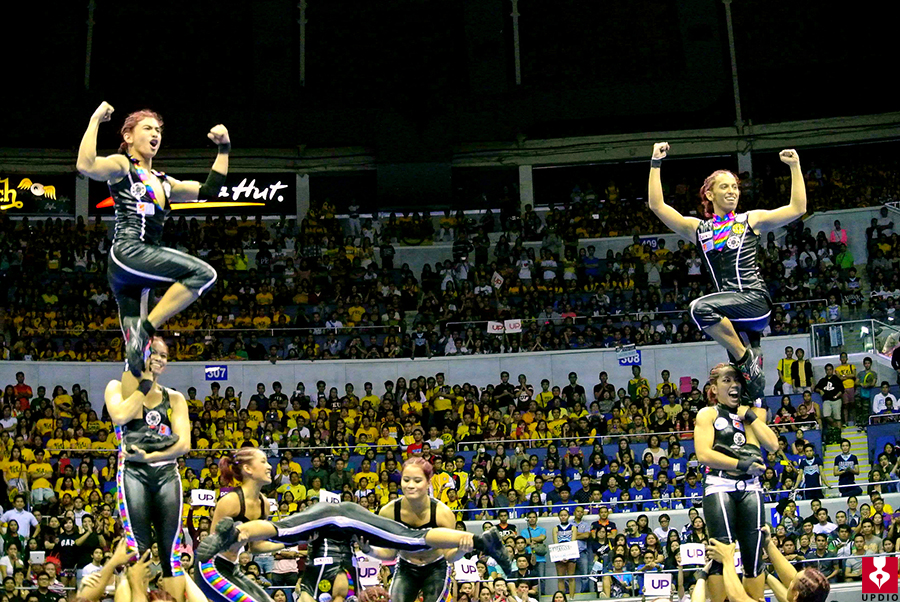 (SEPT. 22)— In maroon hair, androgynous make-up and clad in uniforms and pompoms with rainbow accents, the UP Pep Squad, clinched the 1st runner-up podium finish for the second straight year at the University Athletic Association of the Philippines Cheerdance Competition 2014 (UAAP-CDC) on Sept. 14.

The UP Pep also spread the message of unity and equality through their rainbow-themed routine.

The rainbow flag/banner is usually associated with advocacy of the lesbian, gay, bisexual and transgender (LGBT) movement. Artist Gilbert Baker first introduced the rainbow flag in 1978 composed of eight stripes: hot pink (for sexuality), red (for life), orange (for healing), yellow (for sunlight), green (for nature), turquoise (for art), indigo (for harmony) and violet (for the human spirit). In 1979, hot pink and turquoise were dropped and indigo was replaced by royal blue due to production issues.

Equality.   To illustrate the theme, the UP Pep reversed the traditional gender roles by having the males display their cleavage and the females their abs.

They also surprised the more than 20,000 fans who trooped to the Araneta Coliseum by presenting an unconventional routine as part of their statement on gender equality—lifting and tossing male cheerdancers for the pyramids—a first in the UAAP cheerdance competition.

Furthermore, while waiting for the results of the competition, the UP contingent did the unexpected by circulating to the audience a large rainbow-colored banner as a symbol of hope and unity.

The results.  The National University (NU) Pep Squad, who earned 677.5 points for their Native American warriors-inspired theme, was declared the CDC 2014 champion. The UP Pep earned 658 points. The University of Sto. Tomas (UST) Salinggawi Dance Troupe who earned 625 points for their Chinese-inspired routine, returned to the podium after a 3-year medal drought and won 2nd runner-up.

For the group stunts event, the Far Eastern University Cheering Squad won and received a cash prize of P25,000 after garnering a score of 258.5 points. UST placed second with 251 points followed by last year’s champion NU with 239.5 points.

Winners for the group stunts were judged based on stunt execution, stunt difficulty and overall performance.