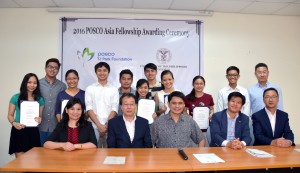 POSCO scholars receive $700 for one year or $350 per semester. The amount is given in its peso equivalent per semester.

Abinal is currently in Hankuk University of Foreign Studies in Seoul, South Korea as an exchange student. All 15 students are continuing scholars of POSCO-TJPF.

Santillan thanked POSCO for their continuous support to the university.

The POSCO Asia Fellowship is one of POSCO-TJPF’s core programs that provides students with scholarships and facilitates research activities with the aim of enhancing mutual understanding and collaborative programs among Asian countries.

To qualify for the POSCO scholarship, applicants must be undergraduate students with a general weighted average of 2.0 or better and must have carried a load of at least 15 units. Students must not be enjoying any other scholarship at the time of the award.

Interested students may apply for the scholarship at the Office of Scholarships and Student Services.