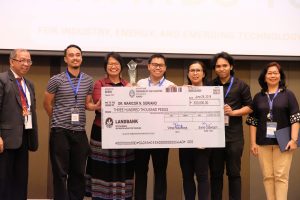 The award is open to all research and development (R&D) projects undertaken for the last three years by Filipino scientists, researchers and engineers from universities and colleges, R&D institutions, and private industries under DOST-PCIEERD’s sectoral concerns clustered into four categories: Industrial Technology, Energy, Utilities and Systems, Emerging Technology, and Special Concerns.

Soriano was awarded for her research project “Integration of ARRAS and CRAVAT Tools,” a DOST funded project under the program Coral Reef Assessment and Visualization-Advanced Tools or CRAVAT.

According to Soriano, CRAVAT is a two-year project (2014-2016) with the objective of  developing coral reef monitoring tools that can go deeper, see wider, analyze higher-dimensional data, and process data faster. The CRAVAT program and its predecessor the Automated Rapid Reef Assessment System (ARRAS) are programs for local governments and environmental monitoring agencies for coral reef monitoring that are easy to acquire, use and maintain. To date, outputs of the CRAVAT and ARRAS projects are being used by 28 different agencies (local governments, schools and non-government organizations).

Soriano added that the Department of Environment and Natural Resources supplied additional funding to allow training of its regional officers in the use of these technologies. Soriano’s team has obtained videos and produced maps covering 2000 km of coral reefs out of the estimated 10,000 km of coastlines with reefs in the Philippines. The permanent visual records can be used as a baseline to monitor changes in the coastal marine resources.

Soriano and her team was awarded with a trophy and a cheque worth P300,000 during PCIEERD’s 8th anniversary celebration on June 29 at Novotel Manila, Araneta Center.

A Professor 7 at NIP, Soriano earned her PhD in Physics from UPD in 1997. Her research interest is in color, video and image processing. She has collaborated with marine scientists to create tools to visualize coral reefs, with museums to digitally preserve and analyze paintings, and with public health experts to create smartphone-based tools for microscopic diagnosis.

For her multidisciplinary work, she was recognized in 2006 as Outstanding Young Scientist in Applied Physics by the National Academy of Science and Technology-Philippines; one of nine Outstanding Women in the Nation’s Service in 2013; and the Leaders in Innovation Fellowship by the UK government in 2015.