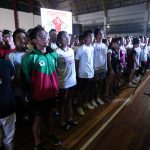 The Pep Rally ran for two shows: one in the afternoon and one in the evening.  Both shows were packed to the rafters as the students came eager to see the athletes perform.  And the athletes did not fail to deliver as they showed their talents.

The program started with the UP Varsity Pep Squad (UP Pep) showing their stunts and moves for this coming UAAP.  After a few words from Sen. Pia Cayetano, a former UP athlete herself, and College of Human Kinetics Dean Ronualdo Dizier, each of the 22 varsity teams were given time to show what they got.

Through the help of Prof. Lalaine Pereña, UP Pep head coach, the Pep Rally was a success.