On and off: 2 stages of Dulaang UP

(July-August)—The curtain opens. The lights fade in. A

good show is on the roll.

Such is a familiar scene at Palma Hall’s Wilfrido Ma. Guerrero Theater, home of Dulaang Unibersidad ng Pilipinas (DUP). Conceived in 1976 by Professor Emeritus Antonio Mabesa, DUP was intended as a production arm of the Department of Speech Communication and Theatre Arts (DSCTA). Since then, it has mounted original Filipino plays, translated works, musicals, classical, historical and even experimental plays.

For every DUP show, the audience only sees the finished 90-minute product, but behind the spectacle is a complex and dynamic process, woven together by the strong synergy of the production team.

To mount a successful play, three aspects must be addressed: the artistic, the technical and the managerial.

The artistic aspect deals with the performance onstage. The technical aspect refers to the application of lights, sounds and other materials to compliment the performance. The managerial aspect involves promoting and marketing the play, at the same time supervising schedules and expenses, among others.

DUP has resident professionals in each of these concerns. The staging of a play involves a lot of people and depending on the requirements of the piece to be mounted, the production team may reach to the hundreds.

Seasons. In a year, DUP holds a season of four plays under a unified theme. To date, DUP has staged more than 100 plays representative of various genres and all theater periods.

On its 39th season and in celebration of the appointment of Dr. Michael L. Tan as UP Diliman’s 10th chancellor, this season’s theme is “Regaining Dignity.” 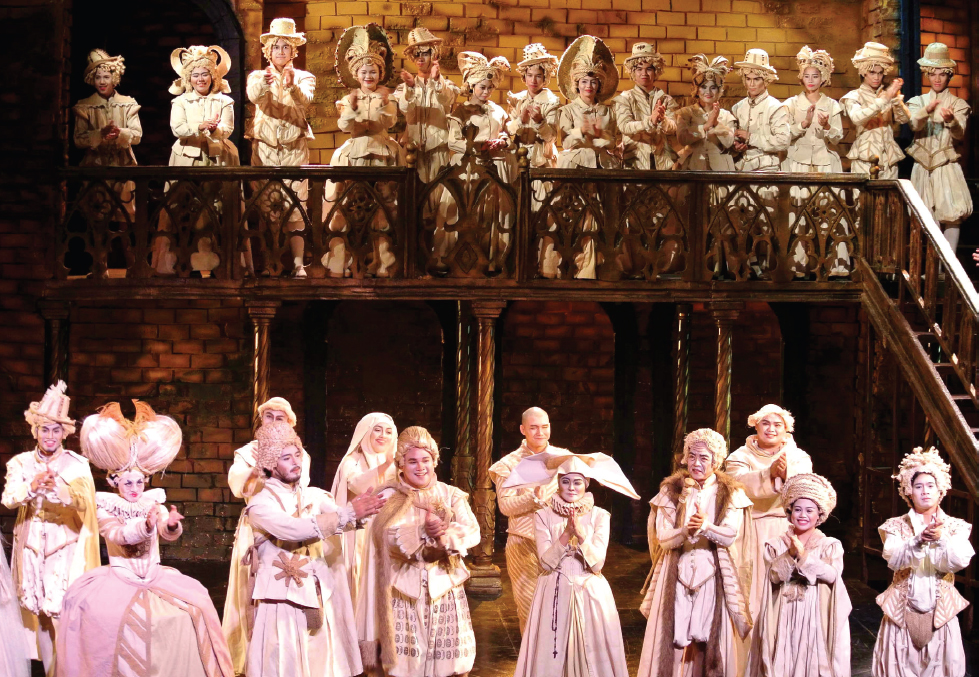 A scene from the play “Measure for Measure”/”Hakbang sa Hakbang.”

Theme. To decide on a season’s theme, members of the Theatre Arts faculty meet and deliberate based on many factors. Cortez, as the artistic director, underscores the importance of what is happening—the social events, national issues, and the current political environment are important points.

DUP also looks into the marketability of its plays. However, as an academic institution, it also has an allowance for experimental theater.

Script. “It starts with the script,” Cortez notes. The script is referred to as “the bible of the production.” It dictates what is going to be shown, although it may be tempered by the director and/or the dramaturg’s interpretation and mood. The dramaturg specializes in the art or technique of dramatic interpretation of a script and does heavy research on the material.

The production begins when the text for the play is finally decided on.

Putting the pieces together. After the script is finalized, the technical and managerial teams are composed. In addition to DUP’s resident professionals, students and several faculty members are often involved.

An open audition is held to choose the actors who will portray the characters in the script. DUP gives equal chances to theater arts majors, alumni and thespians from outside the university.

Through meetings, members of the production team conceptualize the set design, costumes, makeup, lights and sounds and other minute artistic details. Simultaneously, the managerial team plans the marketing and publicity strategies and the overall handling of the activities.

The artistic, technical and managerial teams, in coordination with the director, plot schedule of rehearsals, release of publicity materials, and the show dates.

Rehearsals. Rehearsals occupy the bulk of the production schedule. When the cast is complete, the first reading follows. Later, blocking is applied to the speaking lines.

After four or five weeks, the rehearsed dialogues and movements are polished. The cast members then proceed to the “drop book” sessions; by this time they are expected to have mastered their speaking lines and are discouraged from reading the script.

On to the theater. On weeks five and six, the technical application interplays with the artistic side. Acting and movement are rehearsed with the lights and sounds. In this phase, actors familiarize themselves with the breadth of the stage, the props and set decorations. Actors also have to develop awareness of stage lighting and music cues. 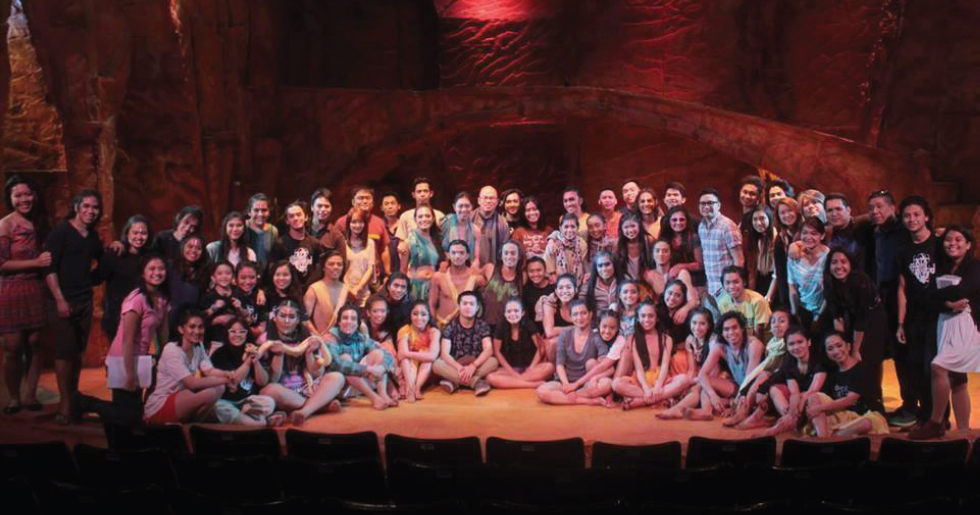 When the actors become accustomed to the stage, lights and sounds, another series of rehearsals ensue. Critiquing by invited guests, usually theater authorities and masters, is done for purposes of revisions and adjustment.

D-day. After a bloodbath of repeated practice, the production opens. The audience is served a masterpiece woven from the artistry, creativity, passion and hard work of the members of the production team.

A DUP play runs for approximately one month or around 20 shows. It is staged at DSCTA’s theater bastion, the Guerrero Theater. Shows run through weekdays at 7 p.m. and on weekends at 10 a.m. and 3 p.m. Tickets usually cost from P160 to P350.

Measuring success. Cortez points out that it is the audience that tells of a play’s success. Good reviews reflect how good a play is. More than monetary profit, Cortez deems positive reaction from the audience an effective delivery of what a play has to say.

Challenges. The honor and prestige of being the university’s premier performing group for theater comes with its share of challenges.

DUP’s main nemesis will always be money matters. While thespians push each other to “break a leg,” the production process literally costs an arm and a leg. 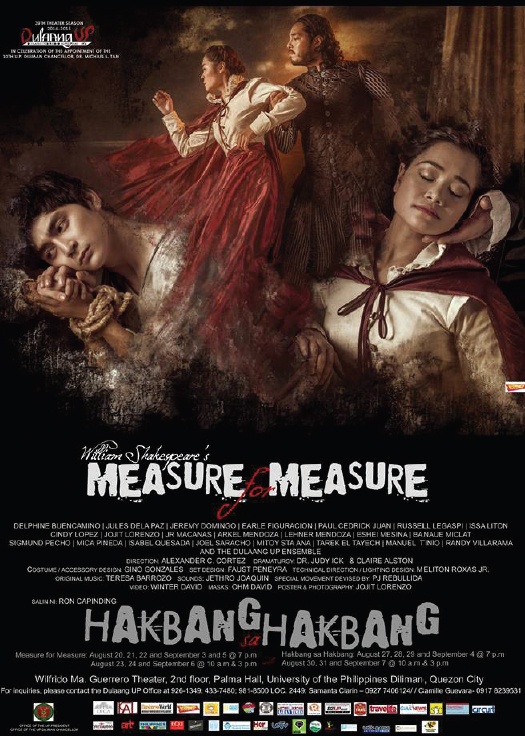 For the most part, government accounting and bureaucratic procedures betray the urgent and sometimes unpredictable expenditures of DUP. Reimbursement is traditionally the norm, and so the theater organization resorts to borrowing money as there is no cash on hand.

Cortez pegs the initial amount needed to mount a play at P250,000. The money is for rehearsal expenses, refreshments and procurement of initial props, among others.

DUP struggles with storage. After a production, they are confronted with the problem of safekeeping costumes and the set. DUP only has cramped quarters behind Guerrero Theater, so most props are disposed off. Those that are kept eventually rot or get worn out, “And these [props] are not cheap!” cries Cortez.

Guerrero, aged and overused, is also ripe for refurbishing: airconditioning system, seats and lighting, need to be improved.

Despite these difficulties, DUP remains strong and continues to grow. Some of DUP’s talents include TV and film director Joel Lamangan, and actresses Eugene Domingo, Shamaine Centenera- Buencamino and Angeli Bayani.

Cortez said with DUP, the transfer of theater experience is immortalized. “One outstanding feature of Dulaang UP is [that] it will last in perpetuity. Even if we’re not here, it will continue.” —Photos courtesy of Dr. Alexander Cortes and DUP.