Ombudsman Conchita Carpio Morales called on the graduates of the UP College of Law (CL) to give hope to people “when all hope is lost” and not turn the law into an instrument of oppression at the latter’s recognition rites on Jun. 27 at the UP Theater.

The Ombudsman, who received an honorary doctor of laws degree, also reminded the Law Class of 2016 to take “to heart the time-honored virtues of industry, perseverance, integrity, civility and loyalty for these will remain constant,” she said.

She said the country no longer needs the best leaders for there are many who “become best after engaging themselves in shady compromises and illicit activities.”  She reminded the future lawyers that how one uses the knowledge of the law is what makes the difference.

“Having a license to practice law is an extraordinarily powerful tool,” she said. “How you act with that license will be your character,” Carpio Morales added.

The Ombudsman reminded the graduates that although a UP law diploma has prestige, it is only a tool for opening the door of opportunity and one’s competencies and skills will determine whether one stays in the law practice.

Cited for among others, her “years of service to the judiciary unmarred by any accusation of impropriety the magistrate unanimously regarded as incorruptible,” Carpio Morales’s passion for scholastic instructions also made for “a more enlightened administration of justice and study of law.” 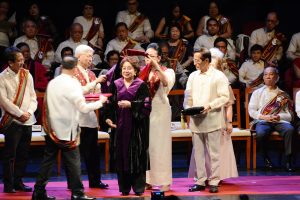 The fifth to assume the post since its creation in May 1988, Carpio Morales was appointed Ombudsman in July 2011.  A UP alumna, she earned her Bachelor of Arts in Economics in 1964 and Bachelor of Laws in 1968.  She joined the Department of Justice in 1971 as Special Assistant to then Justice Secretary Jose Abad Santos.  She became Regional Trial Court (RTC) judge in Pili, Camarines Sur in 1983 and in 1986, was appointed RTC Judge in Pasay City.  In 1994, then President Fidel V. Ramos appointed her to the Court of Appeals, eventually heading its 7th Division.  In 2002, she was elevated to the Supreme Court upon the unanimous endorsement of the members of the Judicial and Bar Council.  She is the first woman magistrate to administer the oath of office of a Philippine president.

The UP CL had their recognition rites a day after the UP Diliman 105th General Commencement Exercises on Jun. 26 at the UP Amphitheater.  According to CL Dean Danilo L. Concepcion, the graduates, 120 in all, were part of the 240 law applicants accepted to the college four years ago.

In a related development, Concepcion, in his opening message, said he believes it is time to revisit the country’s legal education system.  He relates that because lawyers are very important in the Philippines’ justice delivery system, the time spent in studying law is very crucial.  In a study conducted in Ohio, USA, it was proven that legal fees are costly because of the high cost a lawyer spent while studying in law school.  The longer a student spends time studying in law school would mean higher legal fees when he practices law.

Unlike in other countries where a student can go straight to law school after graduating from high school, a Filipino student has to spend four years in a baccalaureate course before going to law school, which takes up four more years.  Adding the years they spend in elementary and high school, a Filipino student dedicates 15 to 17 years of study before earning a law degree.

Concepcion said if we add the one year of law review, a law graduate is already 25 years old when he handles his first case and stands in court.  Adding the two years of the K-to-12 program, a law student is already 27 or 28 years old before he or she can be a full-fledged lawyer. And as a lawyer ages, his medical needs increases as the time spent for his legal practice decreases.  Considering all these, the services of older lawyers are more costly than the services of younger lawyers.  A 28-year-old who just finished law school cannot say to a 23-year-old law graduate he has more experience.  They are both fresh graduates.

Concepcion said “I believe that now is the time to take a serious look at our legal education system and as the premier law school of the nation, the UP College of Law shall be at the forefront of this initiative.”